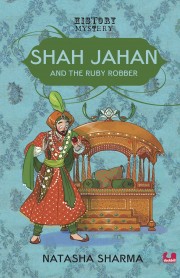 Ages: 5 to 10 years (Highest level of the younger reader books from Duckbill)

Shah Jahan And The Ruby Robber from the History Mystery Series by Natasha Sharma, is an amusing and engaging story for early readers.

The story begins with an excited Shah Jahan, eager to try out his new enormous, expensive, bejeweled throne. All dressed for the special occasion, Shah Jahan, is welcomed in to the throne room, with the appropriate royal fanfare. After seating himself on the throne, Shah Jahan makes a short speech, and rewards the head goldsmith who supervised the making of the throne. Then, as he relaxes and admires the jewels on the throne, he notices, that the great Timur Ruby, the biggest, deepest red, jewel of the Mughal treasury has been replaced a big, round, red, squishy plum.

Shah Jahan is busy with supervising the construction of the Taj Mahal. But the Ruby must be found as soon as possible. So he leaves his trusted oldest daughter Jahanara in charge of finding it.

Shah Jahan’s seven children, Dara, Shuja, Aurangzeb, Murad, Jahanara, Roshanara and baby Gauharara team up, calling themselves the Smashing Seven, and formulate a plan to search for the Ruby. Dara goes on an undercover mission to investigate the workers on the building site of the Taj Mahal, while Roshanara, Jahanara and Murad come up with an ingenious plan to search the ladies of the zenana without their knowledge. Aurangzeb, who despises poets and artists, decides to question them.

Shah Jahan wants an answer by sun down so they all have to hurry. Will the Smashing Seven find the Ruby? Who could have dared to steal from the Mughal Emperor, himself? What punishment will the robber face? Read on to find out.