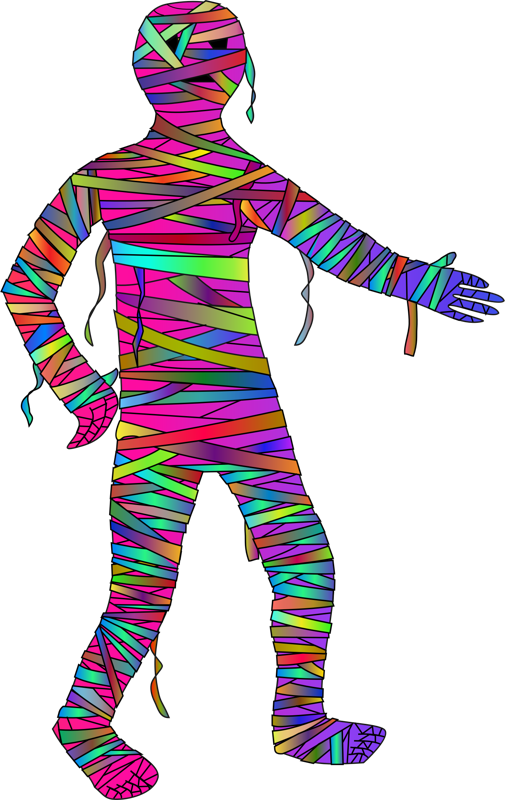 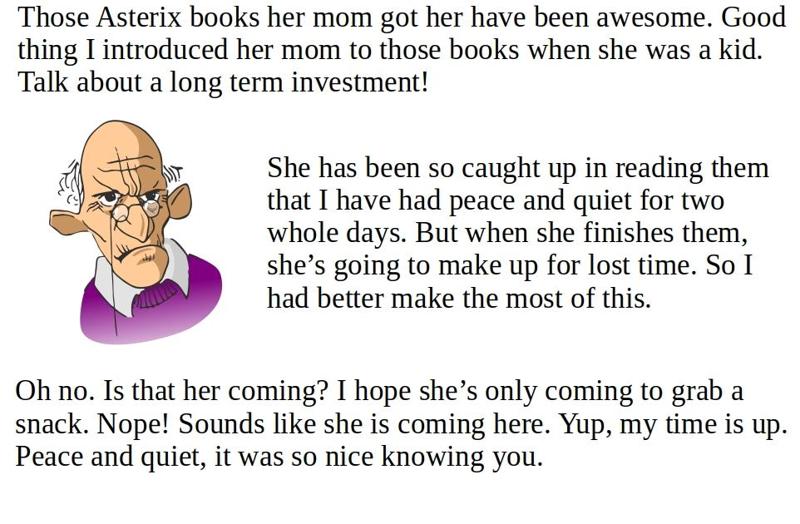 Nina: Nana, these Asterix books are just awesome. What do you think my name would be if I were a character in the books?

Nina: Why Nana? What does it mean?

Nana: Got you Miss Know-it-all, didn’t I? Vamoose and look it up. Leave me in peace

Nina: Okay sure Nana. But you’d definitely be Cantankrix.

Nina: I’m back. I looked it up and I like Obstreperix. Now where was I?

Nana: You were planning to take a nap.

Nina: Nice try Nana, but I was going to tell you about my favorite Asterix story. It’s Asterix And Cleopatra. Caesar is so scared of Cleopatra, and the Romans and the Gauls all envy her nose. It’s all very funny, especially, Caesar's spy. I also learned the names of the Egyptian Gods that the characters keep swearing by. So I read up about them on Wikipedia. Did you know that the god Osiris was the very first Mummy? Isis, his wife resurrected him from the dead, thus creating the first mummy. 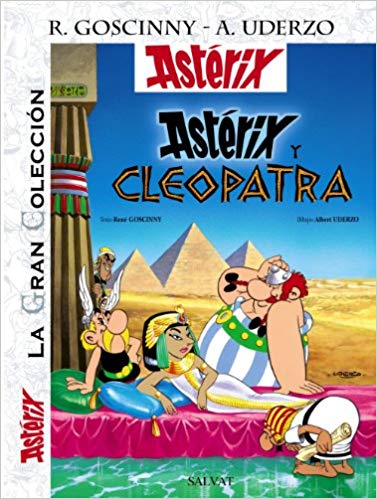 Nana: So you are saying that Isis was the mummy of mummies. Hyuk, hyuk!

Nina: Ha ha Nana. That’s funny. And after resurrecting him she conceived their child Horus, so she made Osiris a mummy and then he made her a mummy. Ha ha. Anyway, Horus eventually challenged his father’s murderer and usurper, Set. Horus avenged his father’s death and became the new king.

Nana: Yes, but I think what’s really interesting about Osiris, is that although he is a god of the dead and the underworld, he is also closely associated with wheat germination because it signifies a sort of rebirth, like his resurrection. The seed is put into the ground and then sprouts new life. Another odd thing is that ceremonies honoring Osiris are fertility rites. Well I suppose Osiris is the son of a Nut.

Nina: Ha ha. By Nut you mean the Egyptian sky God. You’re suddenly in a good mood Nana. Is it because we are discussing such ancient stuff? Otherwise it is quite as unusual for you to be so cheerful, like it is unusual for the same god to symbolize death and fertility. Seems like they should be quite separate. But wait! Perhaps not. I just remembered that Persephone the queen of the underworld and the wife of Hades, is also the daughter of Demeter the goddess of the harvest.

Nana: True. The cycle of life, that begins with birth, is inevitably connected to death and then new life. Mean while, as we live, we must labor on to find meaning in our transient lives and hope that our deeds and their effects live on long after we are gone.

Nina: Oh Nana. Only you can go from funny to morose in 0.2 seconds. This conversation started with Asterix. So tell me, which one is your favorite Asterix?

Nana: After what I have just said, I should have thought it is obvious. The Twelve tasks Of Asterix, of course, inspired by the twelve labors of Hercules.

Nina: Oh! Then what are your labors Nana?

Nana: Well, I have trudged through a few formidable challenges in life, but none so aggravating as dealing with you.

Nina: Aww Nana. I love you too.

Nana: Shoo now. After all your fact sharing about Egyptians, I feel like watching The Mummy Retuns. I can’t tolerate your screaming, every time the Mummy shows up on screen.

Nina: AAAAaaaaaa. Not The Mummy Returns. Bye Nana. I think I’ll go read up about Set.

Nana: Huh! Wow! Who knew it would be so easy to get rid of her. I love you, Mummy.