Potato is an integral part of Indian cuisine. Samosas, chaat, aaloo gobi, pav bhaji, dum aaloo, vada pav, vindaloo, urulaikizhangu, and so many of our favorite chatpata dishes depend on potatoes for their existence. Tomatoes too are widely used in Indian cooking. Pav bhaji, butter chicken, tomato chutney, paneer matar, wouldn't be the same without juicy red tomatoes.

But did you know, that both potatoes and tomatoes were introduced in India by the Portuguese around or after the 16th century! Whatever did Indians eat before then?

Today India happens to be among the top producers of tomatoes and potatoes.

But did you know that the tomato plant can be grafted on to the potato plant and the combo is called pomato or tomtato? It has potatoes for roots and tomatoes for fruits! Ingenious! How cool is it that now you can get ketchup and fries from the same plant?

But the reason these plants flourish, is because of a fortunate coincidence. Tomatoes and potatoes happen to be very closely related, both belonging to the genus solanum.

Grafted plants like the pomato are getting popular and are called fruit salad trees. In fact according to the linked article:

A single citrus tree can be turned into a carnival, with lemons, limes, grapefruit, tangerines, kumquats and oranges all ripening on its branches at the same time

So let's find out what Nina and Nana have to say about this delicious subject. 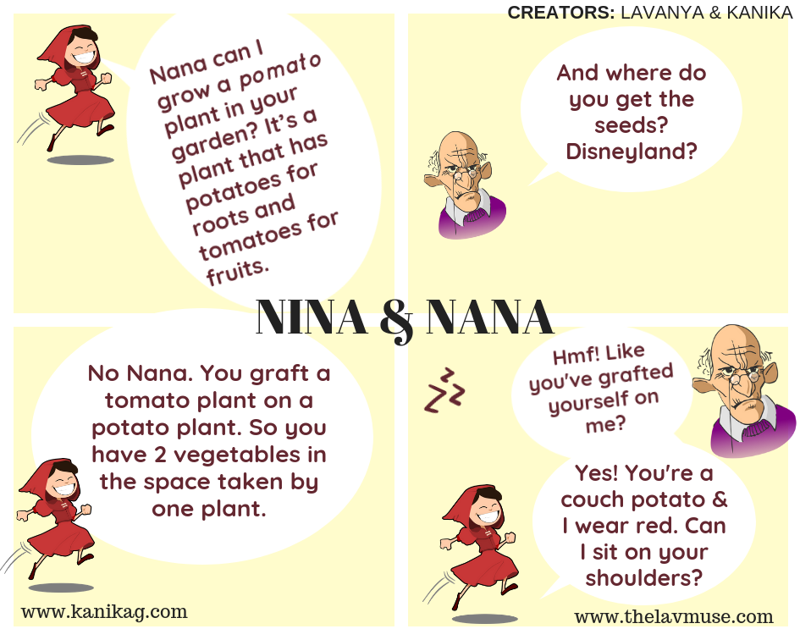