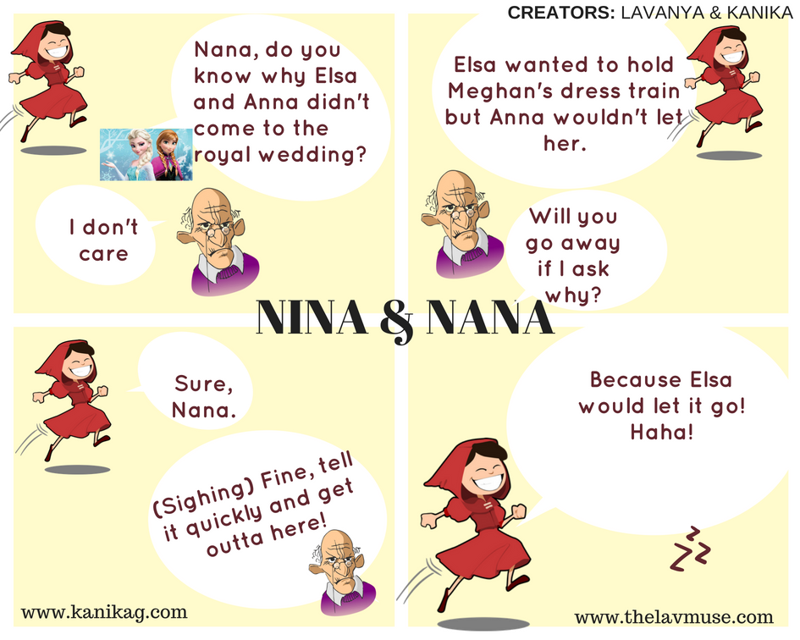 Lavanya and I have started a comic series called Nina & Nana. Nina is a bubbly and cheerful little girl, and Nana is her grumpy old grand father. They share banter about various current events and obscure news, through these comics. A new one will appear every weekday. Lavanya and I look forward to your feedback, and we even welcome topic suggestions in the comments section. Do share the laughs with friends and family.

Unless you are living under a rock, you know that the Royal Wedding between Prince Harry and Meghan Markle has been all the buzz off late. They broke a lot of royal traditions, including having an elderflower wedding cake, instead of the traditional fruit cake. I hear that Nana thoroughly approved. Anything ELDER makes him break out of character in to a jig, but he makes quite sure Nina isn't anywhere to see it.

However, coming back to the point, what none of the mainstream media reported, but our top secret sources reveal, is that, Elsa and Anna were on the guest list, and now you know why they couldn't make it to the wedding.

A pity really, or the wedding would have been elevated from a Royal Gala to a Royal Fantasy, breaking not just Royal traditions, but all barriers separating our real world from a truly fantastic one!