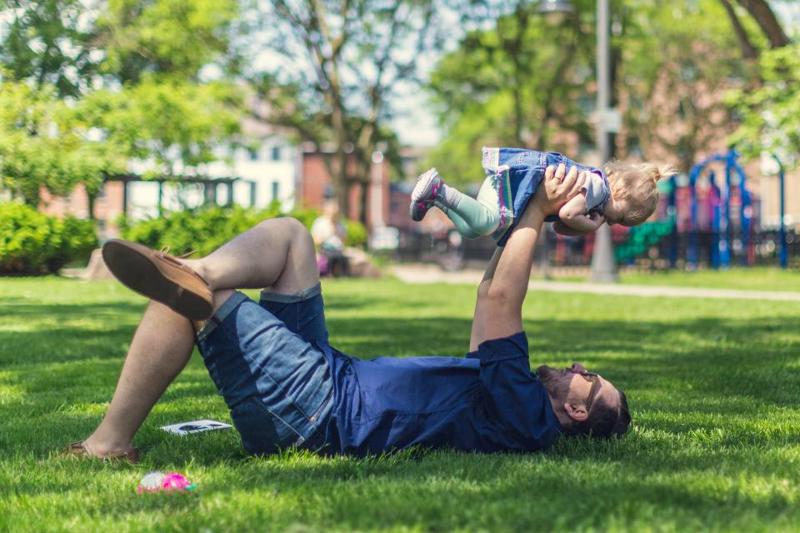 Since our daughter was 6 months old, the last hour before bed has always been daddy daughter time. That is when I get chores done or read or write a blog post. The days I am reading or writing a blog post, I get to hear snippets of father daughter conversations that are often quite amusing.

On Papa's tummy: Papa hour began around age 6 months, when I found it difficult to make our daughter sleep. For several nights she would fall asleep breast feeding but when I tried to transfer her from my lap to the bed or her crib she would wake up and cry and then repeat the process. My husband started making her sleep at night by making her lie on his tummy. Something about the warmth of body contact comforted her, and he was smoother with the transfer to the bed than I was, so she stayed asleep.

Fly me Papa: Once my daughter started sleeping on her own, the Papa time continued, but it became more fun. With his long arms papa would hold her high up in the air and move her around. My daughter would hold her arms up eagerly waiting to be picked up chanting "Fly me Papa, fly me, fly me!"

Camp under an umbrella: In the monsoons I like to use large sturdy umbrellas, not the dainty ones that fit in a purse. But dad and daughter put my umbrella to good use. One night I found them spending their daddy daughter time pretending to camp under my large umbrella. They were generous enough to invite me too:)

Jungle gym Papa: 'Fly me Papa' got more ambitious and versatile and soon became 'mobile play area Papa'. Papa would swing our toddler daughter and slide her down his long legs and walk around with her on his shoulders and spin her around like a merry-go-round and the squeals of thrill and amusement just got louder everyday.

Spa time: One day I found out the relationship was not just one way. They had spa time too when our daughter would pretend to wash Papa's hair with ata and give him a head massage.

Lego time: In the last few months of my pregnancy (2nd baby), daddy daughter time was often spent building various kinds of Lego houses for quarter, the name our toddler used for the baby to come. Papa did most of the building while our toddler daughter tried to feed milk to the Lego toy version of quarter from a Lego cup.

Word games with Papa: At some point papa came up with a lovely game to improve our toddler's working memory, and while he gave her simple 3 or 4 letter words to remember our daughter gave him strings like "ad$45t00+3w". Fun!

Now it is monster time: "Let's eat monsters Papa. I want a tasty monster lunch." was the latest interesting snippet I heard at daddy daughter time last night. Papa introduced her to a couple of very simple video games to work on her hand eye co-ordination. I guess they were catching monsters. I love watching daddy daughter time. I hope it continues for many years to come.

I am happy to report dadyy daughter time continues o date and is even more amusing with 2 daughters than it was with one.