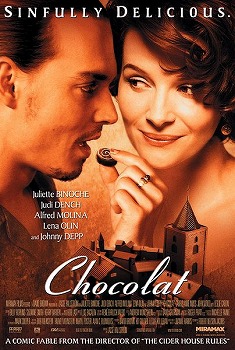 My 7 year old daughter and I watched Chocolat over the Diwali break. It’s a lovely movie for mother daughter bonding, especially if you love chocolate.

When the free spirited Vianne and her daughter Anouk take up residence in a small orthodox village in France, they ruffle quite a few feathers. Many of the town's deep dark secrets are unearthed. While Vianne struggles to settle in without compromising her beliefs and lifestyle, the villagers battle to hold on to their pious ways. The heartwarming drama that ensues is riveting.

The movie begins in an orthodox village in France, where people either rigidly adhere to customs and traditions, or at least pretend to. Anyone who wavers is socially ostracized and quickly brought in line.

With people playing their part from one day to the next without either error or interest, everything runs smoothly. The village has traded joy and laughter for peace and tranquility.

One Sunday morning in the midst of lent, as the inhabitants of the drab village attend church as usual, the North wind rattles the doors of the church and brings with it two figures in bright red cloaks.

Vianne and her daughter Anouk, travelers from afar, carry with them their meager belongings wherever they go, always answering the call of the North wind. They rent the vacant patisserie in the village as well as the apartment above it, and settle in.

Vianne, played by Juliette Binoche, is a free spirited woman, kind and vivacious. She follows no rules or norms, but lives by her own ideas of ethics and decency. Her land lady Armande, played by Judi Dench, is a cynical and disgruntled old woman fed up with the prudish and rigid ways of the village. In Vianne she finds a kindred spirit, and very soon they develop a warm yet prickly friendship.

The Mayor, the most rigidly orthodox of all the villagers pays Vianne a visit, and is scandalized to learn that Anouk was conceived out of wedlock and that Vianne continues to remain unmarried. He is also incensed that Vianne has the audacity to open a chocolaterie in the midst of lent. He equates her to the devil and considers her a threat to the pious ways of the village.

He undertakes a holy war against the chocolaterie, while Vianne succeeds in winning over some of the villagers with the bitter, sweet and spicy secrets of the cocoa bean she has learned from South America.

As the movie progresses, we get to know the some of the dark secrets, sadness and turmoil lurking beneath the seemingly peaceful lives of the villagers.

We also get a glimpse of the anguishes and anxiety Vianne hides under her cheerful countenance, and the difficulties she experiences raising a daughter while following a carefree nomadic life style.

The hostilities between the Mayor and the Vianne escalate with time, and the Mayor with his strong influence over the towns people, succeeds in making life very difficult for Vianne. This is when we come across Vianne’s greatest weakness.

When she is unable to convince a community to accept her radical ways, she gets upset and runs away to start afresh somewhere else. She is not immune to judgment as it first appears, but avoids thinking of it for as long as she can, and then runs away when it finally gets to her.

Will she run away again, or is something different this time? Watch the movie to find out.

An apparently pious and disciplined community harbors deep dark secrets. For example, the cafe owner Serge’s wife Josephine suffers brutal domestic abuse in the hands of her husband, but such things are not to be mentioned in an orthodox town where marriage is sacred. Yet, just a little kindness shown by Vianne gives Josephine the courage she needs to escape the cruelties of her husband. Vianne supports her by giving her a job in the chocolaterie and a place to live.

Through this and many other examples we learn that perfection and tranquility is imposed on the town through harsh rules which exact a heavy price in the form of misery and pain endured by the residents.

The friendship between Vianne and Josephine is the highlight of the movie. Although her life is much improved, Josephine considers herself weak, until one day she learns of her strength when she is able to overpower her husband and save her friend. Subsequently, she learns that weakness comes in many forms, and even those who seem emotionally strong on the outside can succumb to it. No one is immune. Her true strength is manifested in her role reversal with her benefactor Vianne. She finds the courage to stand up to Vianne and helps her fight her demons.

Vianne and Anouk seem to have an ideal an quirky life, but right from the beginning there are subtle signs, that under the chocolate coated hood, they have their own problems just like everyone else. Anouk’s imaginary friend Pontouk with a bad leg, symbolizes her longing to settle down and belong.

Just like the perfect chocolate is a delicate balance of a variety of flavors, the movie strikes a beautiful balance between a jumble of emotions from sweetness to bitter rivalry all blended together with flawed human interactions. It’s amazing how so many imperfections can combine to weave something so satisfying.

While all the actors performed very well including the eager and inexperienced young priest struggling with ethical questions and the role of authority, Juliette Binoche’s ability to effectively blend strength with vulnerability and human fallibility, and ice it with a sense of unadulterated joy could rival the magic of chocolate itself.

What makes chocolate special is not it’s sweetness, but its delicate balance of flavors, that performs a symphony on our senses.

A charming symphony of imperfections.