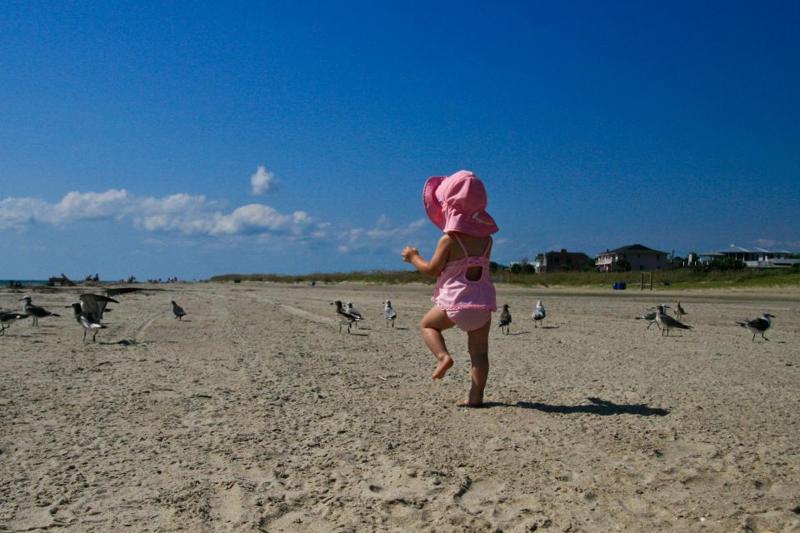 My two bundles of chaos were chasing each other around the massive sofa chair in our living room. Suddenly the smaller blur spotted Papa, changed course and charged after him. The bigger blur, was unfazed by the sudden change of direction and remained in pursuit of the smaller blur.

Papa was nursing an irate eye from over exposure to chlorine in the pool and was barred from his usual activities of reading and working. So naturally he enjoyed being chased around the house by his offspring. Soon a train of oddly mismatched bogeys was rampaging through the house.

The younger one was bouncing like a beaver hyped up on caffeine, so she looked like she was going to bite Papa's bums, thus earning her first super hero title, Bum Biter.

Predictably, soon there was an accident and they all got entangled and fell. Bum Biter squirmed out of the wreckage looking like an oversized frowning puchka with arms crossed and complained, “I don't like it!”

On Friday morning, Bum Biter and her older sister were feeling their oats. They decided to poke and prod me, AKA, Volcano Mama. The older one having experienced several massive eruptions knew when to stop poking and quickly gobbled her breakfast. But Bum Biter was feeling particularly brave with her new super hero identity.

Perhaps she thought an eruption may be most amusing. Her expression certainly seemed to convey that. Well a volcano can only be pushed so far before it starts spewing hot lava.

But seems like Bum Biter had adorned her self with heat proof armour (I wonder where she got it ... I must reprimand her supplier) and considered herself to be up for the challenge. She played offence too, with charming smiles and giggles. It was a heated combat that Volcano Mama won by wearing down the heat proof plating and Bum Biter finally ate her breakfast just as Volcano Mama collapsed with exhaustion. But there was no time to lounge around. The clock was ticking and they we were running late for school.

As the driver sped through the crowded Bombay streets swerving and snaking through traffic to make it on time, Volcano Mama had switched her schizophrenic personality (we moms call it multi talented) to Yakety Nag mode. YN nagged BB to eat her breakfast quickly in future, muttering the dire consequences of the failure to comply whist occasionally yelling at the traffic lights for slowing them down. BB was quite unfazed, but she conceded. “Okay Mama. I'll eat my breakfast quickly mama.” And then came the disarming smile and the the small condition for compliance “But you'll give us pizza for breakfast no mama?” She asked as if it were quite a reasonable compromise.

Now in a better mood, I patiently explained the importance of a nutritious breakfast and the problem with the morning time crunch and Bum Biter nodded along as if she were following my well crafted arguments. Finally I asked. “So you'll eat your breakfast quickly from tomorrow, right?”

Bum Biter scrunched up her face in to an adorable frown, puffed out her cheeks and calmly but firmly and said “No!”

Steam started to escape my nostrils and I could feel myself switching back to volcano mode. Bum Biter did not seem concerned. She was busy telling her sister, that Abol Tabol by Sukumar Ray, must be a book about towels and started bouncing around on the back seat of the car.

On the brink of volcano mode, I held on to her tightly and launched in to an elaborate explanation of the dangers of bouncing around in the car and asked her to sit back and stay still.

Bum Biter squeaked, “But why mama?”

Gritting my teeth, I was finding it really difficult to clamp down the brewing eruption.

Still on my lap, Bum Biter did not wait for an answer that did not really interest her and launched in to song. She sang Sa re ga ma na adhinayak etc etc an absurd khichadi of Sa re ga ma and the national anthem which was later seamlessly transitioned in to some other songs too.

I was caught between amusement and despair feeling like Sukumar Ray himself had scripted my absurd life.

This exaggerated piece of fiction is loosely based on the shenanigans of my youngest offspring.