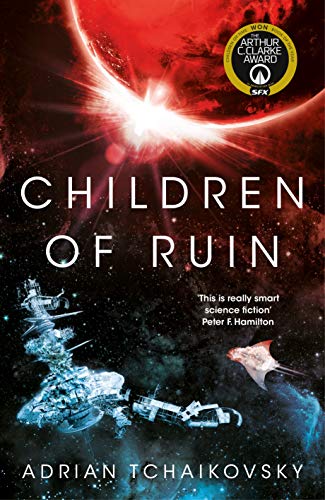 Children of Ruin by Adrian Tchaikovsky is a sequel to the brilliant novel Children of Time. This time, a human terraforming team arrives on a planet that had indigenous life. They are faced with the ethical dilemma of obliterating an existing civilization to establish their own, or not do the job they came for in the first place. The team also discovers a second nearby planet whose surface is almost completely submerged under water.

Around this time, due to war and possibly destruction of civilization on earth, all communications with the mother planet are lost. With no orders coming in, and a sense of loneliness threatening to overwhelm the crew, the leader Baltiel must make a decision. He is aided by Senkovi, who is second in command.

The team decides on a two pronged approach. One section led by Baltiel decides to study the planet with an alien functioning ecosystem, before deciding what to do with it. Another team led by Senkovi works towards terraforming the water world.

Senkovi has brought with him pet octopuses. With the help of the nano-virus he decides to guide the octopuses and their progeny towards intelligence to help him terraform the water world below. Known for their innate intelligence, the octopuses respond well to the virus, but their method of communication and way of thinking completely baffles Senkovi. He sees them making progress, but does not understand their methods, and it becomes increasingly difficult for him to teach them. Yet somehow, they seem to learn. His frustrations are mirrored by the octopuses, and then a miscommunication between then during an experiment has devastating consequences.

Baltiel’s team working on the neighboring planet encounters a most unexpected form of alien life. The strangeness of it leads them to underestimate it’s intelligence and adaptability and exposes the team to grave danger.

Much much later, responding to a signal from this star system, a ship arrives. This ship carries a crew of Humans and intelligent spiders, who have learned to co-exist and co-operate combining their technologies and skills to create powerful and efficient hybrids.

What happens when the Spider/Human civilization encounters the octopus civilization and a truly strange and alien life form with no ties to earth? Read on to find out.

The octopus intelligence is truly alien, not just in appearance and choice of materials and tools, but in their methods of interaction and fundamental thought processes. The spiders used a silk based form of technology completely unfamiliar to humans, however humans could easily relate to their social structure and methods of scientific research.

The octopuses on the other hand use human technology, but their emotional makeup, social structure and language are completely incomprehensible to both the spiders and the Humans. Once again Adrian Tchaikovsky, surprises us with the depths of his imagination in developing intelligent society of truly alien nature.

It made me wonder if fluid social structures similar to those of the octopuses may have evolved in many tribes among humans across the world, but were stamped out by colonialism and forced in to the rigid forms of classification that made sense only to imperialistic Europe.

The Human/Spider civilization has incompatibilities that both parties work to overcome and efforts undertaken to bridge the gap and the underlying prejudices, insecurities and resentments, the two species have towards each other, makes for interesting interactions between them.

The diminishing importance of the creator

The status of the human-machine intelligence hybrid Avrana Kern diminishes from God, to benefactor, to resourceful and important co-worker as the Spider/Human civilization evolves and grows.

The slime mold alien life form may seem unrealistically powerful and a contrived plot device, but it did reminded me of an ant-brain-controlling fungus, I had once read about.

The efforts made by the various species to communicate with each other, whilst they battle the instinctive fears arising from not knowing alien intentions or lifestyle, and tittering on the brink of mutual destruction, but fighting hard to find the patience and ingenuity to get through seemingly impossible communication barriers, makes the last section of this novel and enlightening and engaging read.

The octopus civilization is so alien, it is difficult to describe or empathize with. Yet Tchaikovsky seems to want us to really see them the way he sees them. But whatever his deep understanding of octopus psyche and society is, it seems he is unable to convey it in lay terms and ends up going in circles. His efforts in trying to make us feel as he does, ended up frustrating me, and I began to skip the parts with details about octopus color change and visual communication.

Perhaps it works as a literary device in making the reader really feel the frustration and helplessness of the human/spider civilization, and by extension the reciprocal frustration of the octopus civilization, but it did not make for pleasant reading. I would have preferred the description of octopus interactions and society limited to being explained through situations they had to face, but without the repeated vague references to the nature of their communications.

A collision of irreconcilable cultures with an impossible species!