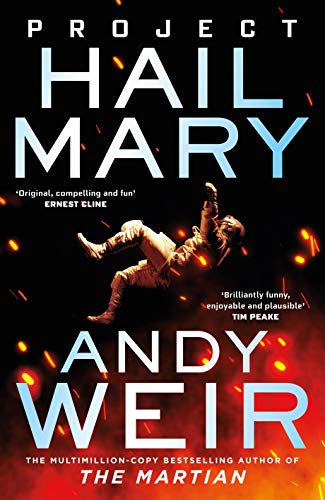 The Martian by Andy Weir was a fascinating and unusual sci-fi story. The author had taken great pains to identify realistic problems and suggest feasible solutions. The problem solving approach of the protagonist was intriguing and the book was not only entertaining, but also a very satisfying read.

So when I heard about alien life, interstellar travel and impending apocalypse in Project Hail Mary, I was a little skeptical. Was Any Weir veering away from his greatest strengths and gravitating towards cliched sci-fi tropes? I put my faith in him, and read the book anyway. I was not disappointed. Converting problem solving and basic science into riveting page turners is definitely Andy’s forte, and I look forward to a lot more from him in future.

A junior high science teacher wakes up from a medically induced coma to find himself alone in a strange room. He can’t remember who he is, or how he got there. Luckily for him, his reasoning powers are intact. As he struggles to figure out his location using basic high school physics experiments and common sense, some old memories are triggered. Over time, he gradually remembers he is on a mission to save humanity from space microbes that have been depleting the sun of its energy leading up to apocalyptic climate change on Earth, unless he can do something about it. But what can he do?

He recalls that studies on Earth had revealed, that the space microbes had similarly affected all but one of the near by stars. What made Tau Ceti special and could that knowledge save Earth? It is his mission to find out. But being the only surviving crew member, can he carry out the mission successfully?

That’s when he notices another spaceship in his vicinity. It’s clearly not of human design. Is this another problem for him to tackle, or an ally who can help him, or perhaps a little of both? Read on to find out.

A practical approach to the curve balls in life