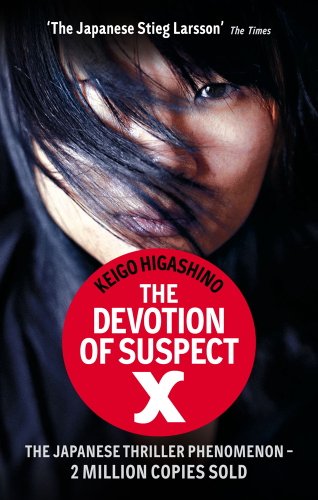 In The Devotion of Suspect X by Keigo Higashino, as the two main characters engage in a riveting battle of wits, a rich and complex plot gradually unfolds, ultimately evoking an exquisite synthesis of unexpected emotions.

In a moment of desperation, while trying to save her teenage daughter Misato, from the clutches of her sleazy ex-husband Shinji Togashi, Yasuko Hanaoka kills him. The relief of saving her daughter against all odds, is shattered by the threat of being convicted of murder.

Before Yasuko has a moment to process the horrifying situation she suddenly finds herself in, the doorbell rings. The man at the door, Ishigami, is a genius mathematician who has had to make some tough choices and ended up with an unfulfilling career as a high school math teacher, and happens to be her next door neighbor.

He ignores her feeble attempts to hide the crime. She is awed by his frighteningly accurate deductions and guesses as to how Yasuko killed Togashi with Misato’s help.

Yasuko had only just learned from a friend that morning, that Ishigami harbors a soft spot for her. She can’t think of a single other reason why Ishigami goes to such lengths to help her hide the crime from the police. Ishigami seems to be able to outthink the police at every step, ensuring the safety of both mother and daughter by giving them detailed instructions on exactly how to respond to questions the police ask.

It’s not until Manubu Yukawa, a physicist and an old friend of Ishigami, gets involved, that the police make any real progress with cracking the murder. But is Ishigami too smart for them? A riveting game of cat and mouse, a battle of wits between mathematician and physicist, long time friends and competitors, ensues.

Has Ishigami the genius mathematician, executed the perfect cover up? Then what is the price of perfection? Read on to find out.

The price of perfection.