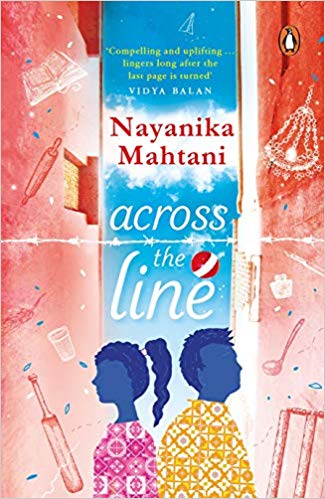 across the line by Nayanika Mahtani, begins with the drawing of a line that rips apart a nation. The bloodshed that follows destroys innocent lives and tears families apart. The narrative follows the events in the lives of Toshi and her family in Rawalpindi, and that of the Haider family in New Delhi.

Chaos reigns, as people fearing for their lives are uprooted from their homes and dragged across the border. While mobs from one community vandalize and slaughter members of the other, neighbors and family friends risk their lives to protect their loved ones. In the aftermath of the carnage, the refugees rebuild their lives. Their's is a life long struggle to suppress painful memories of all they have lost, including a part of themselves.

Sixty one years have passed by and Toshi is now a spunky grandmother with a flourishing family in New Delhi. Her grandson Jai stirs in her, vivid memories of Tarlok, the brother she last saw just before the violent mob attack in Rawalpindi that shattered her world. The burden of guilt she caries for having left Tarlok alone moments before the attack haunt her everyday. But she hardly ever expresses her sorrow. In fact, she is the pillar of strength, that her family has come to rely on.

At the same time Inaya Haider, an only child and the youngest member of the Haider family, now residing in Rawalpindi shares a complicated relationship with her father. As much as they love each other, ever since Inaya's mother Bennifer was killed in a bomb-blast, there seems to be a wall between them that hinders communication and expression of affection. Inaya loves to play cricket, while her father considers it inappropriate and wants her to focus on her studies.

One day, when Jai's mother Aarthi announces that she needs to go to the UK for a few months to complete an assignment, her family is supportive and her mother-in-law Toshi promises to hold down the fort in Delhi. The family plans a trip to join Aarthi during the summer vacation. Jai is elated, and being a foodie, he is particularly excited about visiting Nabeel's Kitchen, a restaurant in London, famous for it's haleem rolls.

Luckily for Inaya, everyone else in her life including her friends and grandparents are highly supportive of her interest in cricket. Everything she learned about cricket came from observing her friend Zain being coached, and her friend Saba informs her of an amazing opportunity for young girls who are talented at tape-ball. A league tournament is being organized by Nabeel of the famous Nabeel's Kitchen. If Inaya is selected to represent Pakistan, she will have a change to go to London with her team and participate in an international tournament. It's a dream come true for Inaya, but will she be able to pull it off? How will she attend the practice sessions, and then if she is selected how can she possibly get her father to agree to let he go to London? It all seems impossible.

How will Inaya's grandma succeed in pulling a rabbit out of her hat? Why do Jai and Inaya keep bumping in to each other in London? Is it fate, or plain mischief? Read on to find out.

Two countries, two families and three generations! Just as the lines are blurred and sanity restored, history threatens to repeat itself ...