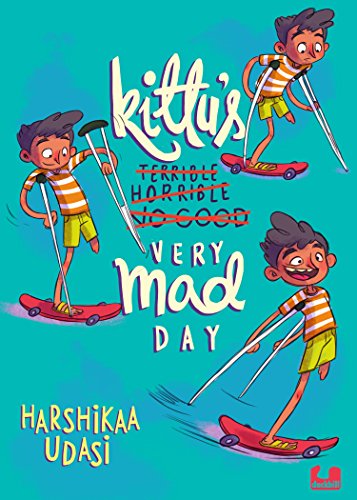 Ages: 5 to 8 years (Highest level of the young readers books from Duckbill)

Kittu's Very Mad Day by Harshikaa Udasi, is a story of an outspoken, one-legged young boy, Kittu, from Mumbai, who gets separated from his large boisterous family during a vacation, and is lost in Panna, Madhya Pradesh. Now who was the other boy who got Lost in New York? Didn't his name begin with K too?

Kittu is a spunky little boy. He lives in a large joint family, which he believes, is the world's most chaotic family. One day, they all go on a vacation to Panna, and on the way back, when they stop at a dhaba for a meal, Kittu gets accidentally left behind.

Being intelligent and resourceful, Kittu manages to latch himself on to a kind hearted ice cream seller named Madhav. Madhav agrees to, excuse me, is bulldozed in to agreeing to, help Kittu. Madhav suggests going to the nearest police station. But after years of being threatened that policemen will lock him up for not eating his meals, Kittu has developed a deep distrust for law enforcement. To stop Madhav for taking him to the police, he pretends that his father is a notorious Mumbai don who will extract revenge for his boy being handed over to the police.

Frightened at the thought, Madhav takes him home instead. The sleepy little village that Madhav lives in, is full of surprises as Kittu discovers. And Madhav's daughter Mad, lives up to her name. There is never a dull moment with Mad for company, and Kittu has quite an adventure whilst his family is desperately looking for him. Read the book to find out what astonishing discoveries Kittu makes about himself and the small sleepy village in the middle of Madhya Pradesh (is that the middle of the middle? Hmm...).

Embark on an awesome Madhya Pradesh adventure with Don Jr and Mad.