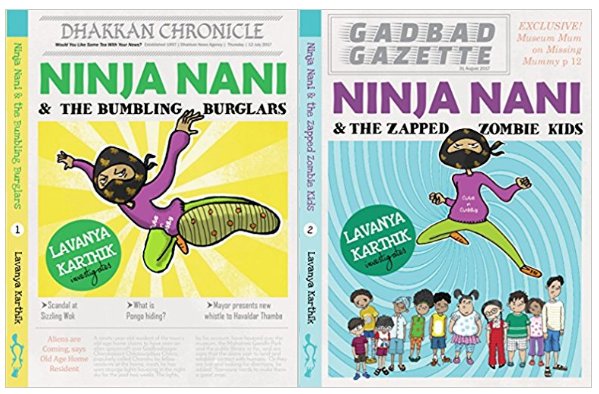 Ages: 7 to 12 years (Lowest level of the middle reader books from Duckbill)

The Ninja Nani Series by Lavanya Karthik is about a regular grandmother, who turns in to a strangely attired, crime fighting, ninja at night. She is accompanied and assisted by her grandson Deepu, in her crime fighting escapades.

The first story in the series, called Ninja Nani & The Bumbling Burglars, begins with Deepu wanting to watch the Ninja Dragon cartoon on TV, while Nani wants to watch a cooking show, featuring Chef Dalmakhani. Nani and Deepu fight over the remote, grabbing it from each other, as the channel rapidly alternates between Ninja Dragon and Chef Dalmakhani, until there is a sudden blinding flash of light and the air crackles with electricity, and then everything goes quiet.

Deepu, eventually discovers, that the Ninja Dragon’s powers have somehow got transferred to his nani. Nani is thrilled with her new powers and agile body. She dresses up in a very strange ensemble of clothes belonging to Deepu’s mother. Eager to try out her new powers, Nani runs out of the apartment in search of dark forces. Poor Deepu, in the mean time, is trying desperately to keep Nani’s secret from his mother who keeps calling incessantly to check on his well being.

The evening is most frustrating for Deepu, since Nani without any experience in using her powers, keeps messing up, and Deepu ends up as the victim of all her mishaps. Deepu is furious with Nani was using her ninja powers for fun and frolic, instead of something noble, like a real ninja would.

When Deepu declares, that Nani may have the powers, but she is no true ninja, her powers vanish. But just then, three bank robbers close in on Deepu and Nani and kidnap them. What will Deepu and Nani do now? Nani can’t save Deepu without her Ninja powers, or can she? Read the book to find out.

In the second book, Ninja Nani & the Zapped Zombie Kids, Deepu believes something is terribly wrong with the tuition classes in his neighborhood, attended by all his friends, but Nani does not sense any danger through her Ninja powers and dismisses Deepu’s concern as a figment of his overactive imagination. But, of course, Deepu is right and Ninja Nani has to face her most formidable foe yet, the Evil Green Gecko, with mind control powers. Will Nani succeed in defeating the Gecko? Read the book to find out.

I like how the author adopts a friendly chatty tone with the readers and empathizes with them. She uses humor, and her own dislike of constraints imposed by authority figures, to connect with kids.

But in my opinion, the humor is overdone. It feels forced, with too many hyperbolic similes, that irk rather than amuse. Most of this awkwardness is in the first half of the first book, and it gets better as the story progresses.

In fact, the second book is better than the first, in this respect, and possibly, it took the author some time, to get comfortable with the characters. To be fair, my 5 year old found the humor in the first book, less annoying, than I did.

The fight between Deepu and Nani, at the beginning of the first book, reminded of the tug of war over the remote control, between my brother and our grand father. My 4 year old brother, wanted to watch Scooby Doo, while my grandfather wanted to watch cricket and they would keep switching the channel as soon as one could whisk the remote away from the other. Eventually, my grandfather grew to like Scooby Doo, and my brother became a cricket fan. The book touches upon some very real interactions between kids and their grandparents, encompassing both how much they love each other, as well as how they find each other's ways and habits annoying and irksome.

Duckbill sent me these books for an honest review.