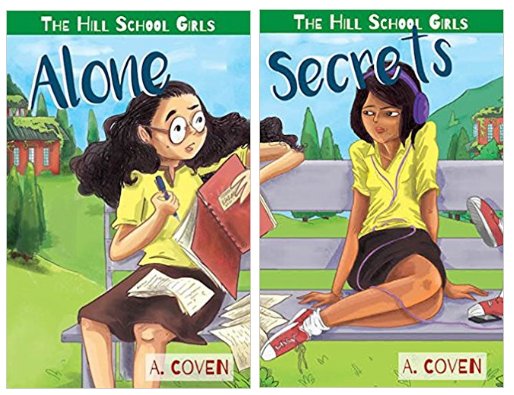 Ages: 9 to 14 years (Middle level of the middle reader books from Duckbill)

The The Hill School Girls by A. Coven are a series of books about the lives of teenage girls at The Hill School For Holistic Education. As the name indicates, the school has an unusual curriculum and employs unorthodox teaching methods.

The school, located in the town of Lailapaani, has a hostel for out station students, but mainly caters to the local girls, who attend as day scholars.

The first book, Alone, is narrated from the perspective of a day scholar named Elizabeth. Elizabeth, a studious and conscientious girl, finds it difficult to make friends. When Hill School changes management, from the local trust that has been running it for years, many parents, skeptical about the new management and its revolutionary theories on education, switch their kids over to a different school. Among those who transfer schools, is Elizabeth's best friend Pallavi.

Left without a best friend, Elizabeth is apprehensive about starting the new academic year. The dramatic change in the curriculum and school rules make hings harder for her. Elizabeth feels lonely and lost.

To add to her misery, the school's new philolosophy requires the girls to complete projects in groups, and Elizabeth is clubbed together with a couple girls she can barely tolerate. Ayesha, Marukh and Maitereyi, the other girls in Elizabeth's group, are the main characters in the series. While Elizabeth's group is doing research for their project, they accidentally get tangled up in a nefarious plot that threatens to defame the school authorities, the librarian in particular, who is the one staff member Elizabeth holds in high esteem. Elizabeth herself is the victim of a frame up. Will the girls set aside their differences and work together to find the real culprit and diffuse the threat? Read on to find out.

The second book, Secrets, is narrated from the perspective of Ayesha, who lives in the school hostel. Ayesha is happy to be back among her friends at Hill School and things get off to a great start. The school has a new male computer teacher. Ayesha loves computers and is thrilled she will be finally using them in school. She enjoys showing off her computer knowledge and skills to all her friends. To top it all, the school has scheduled a concert for the end of the term, that the girls themselves have to plan organize and execute. Ayesha signs up for the research team, where here skills at efficiently surfing the internet will come in handy.

But Ayesha has bottled up a secret from her past, which is eating away at her. Supressing the secret from her closest friends, who know she is keeping something from them, gradually makes her cranky. One day, Pushpa, the daughter of the Hill School gardner, is a victim of a violent assault. As the girls talk about the incident and the reaction of her family members, the discussion veers around to the subject of secrets. Feeling defensive, Ayesha blows up at her friends, and alienates them.

The situation is awkward since Ayesha and Maitereyi are roommates. As the preparations for the concert progress, the girls enjoy working in groups and Ayesha feels lonely. Then one day, one of the girls from the school accidentally discovers Ayesha's secret. Ayesha is surprised how much better she feels with the opressive secret off her chest. She realises that fear and shame were causing her to lose perspective and suffocating her, but once she faced her fears, the ghost of her past no longer had any power over her.

Ayesha wants to use her newfound wisdom to help Pushpa. In order to do that, the girls need to figure out who hurt Pusha. Here is another mystery for the girls to solve. Will they be able to find Pushpa's tormentor? Will they succeed in making him feel remorse? Will Pushpa find the courage to face her attacker? Read on to find out.

My take, the good and the bad

This is a rather strange series to review. When I read the first book of the series, I was disappointed, because the idea had a lot of potential. I loved the school stories by Enid Blyton and looked forward to similar stories in a modern Indian setting.

Unfortunately, the main characters lack depth, have awkward interactions and conversations, and one of them always seems bored. The teachers appear to be incompetent flakes, the classes are chaotic and unproductive and the back drop consisting of the town as well as the school are barely described. Add to that, the plot is thin, and the characters lack consistency. There are also a few missing words and typos. Perhaps the author wanted to convey the troubles faced by the school, when it changes management, but it did not make for an engaging story. The book is readable, but somewhat boring.

So I was reluctant to read the second book, but I am glad that I did. The second book is dramtically improved, a complete turn around, and a pleasure to read. The school authorities seem to have got over their growing pains, the back drop of the town and school has been filled in, the school life is better described, the main characters have found a rhythm and are getting better at opening up to the reader and to each other. Some of this seems abrupt and even inconsistent with the first book, but if you overlook that, the second book holds a fantasic story. Even the characters of some of the teachers has been fleshed out a little in this book.

Here is what I liked about the second book:

I am looking forward to reading the story that is going to be from Maitereyi's perspective, because Maitereyi's single mother is a teacher at the school, and Maitereyi's mother and the male computer teacher seem to be developing a friendship. But is it just a friendship or more than that, remains to be seen.

Duckbill sent me these books for an honest review.