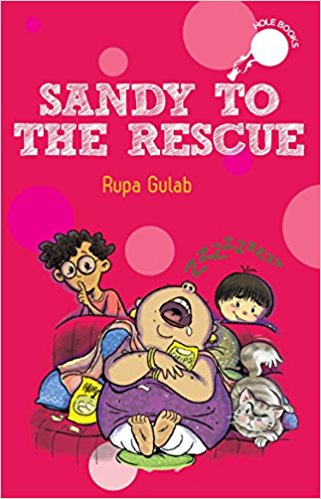 Ages: 5 to 8 years (Lowest level of the middle reader books from Duckbill)

Sandy To The Rescue is a simple and cute story about the daily challenges and shenanigans of a seven year boy named Sandy.

Sandy finds out that he is soon going to have a brother or a sister, and he is not happy about that. Add to that, Daddy ate up his favorite evening snack last night, so Sandy has to make do with a poor substitute. Things are just not going right for him. He leaves to house sulkily to go out to play. He hides behind the hedges to bark at Mrs. Gupta's cat as usual, to frighten it, but instead of hissing, this time, it barks back, startling Sandy. Sandy soon finds out, that it 's not the cat that is barking at him, but a little kid.

A boy named Aftab, a year younger than Sandy, is alone with Mrs. Gupta. Aftab's parents were held up and asked Mrs. Gupta to keep him a while longer.

Aftab begs to have dinner with Sandy at his house, but Sandy's mother does not allow him to have friends over after seven in the evening. Aftab challenges Sandy to sneak him in and the idea of harboring a fugitive in secret is exciting. So Sandy takes up the challenge. Will Sandy be able to feed Aftab without getting caught? Even if he does, where will Aftab sleep? What will happen if Sandy's parents find out? Can Mrs. Gupta figure out where Aftab went? Will she call the police because she can't find him? Read on to find out. 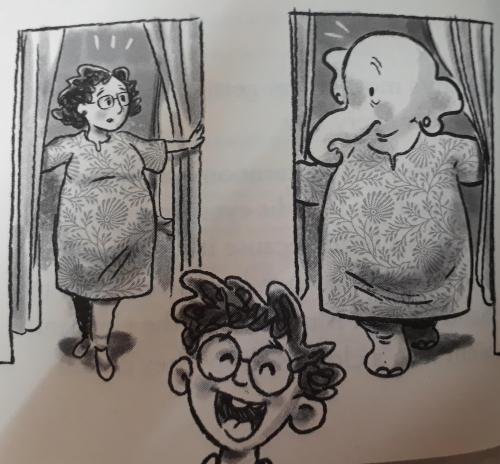