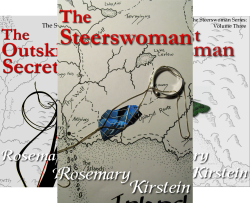 The Steerswoman Series by Rosemary Kirstein, is the story of a Steerswoman, Rowan, following strange clues, seeking knowledge, and logically piecing together bits of information, to figure out the nature of a devastating threat her people will face in the near future.

The steerswomen share and seek knowledge. They believe that the free exchange of information is essential for progress, development and figuring out the mysteries of the universe. The ideal steerswoman has integrity and is curious, courageous, intelligent, creative and resourceful. The steerswomen travel far and wide, to uncharted places making new and detailed maps, learning about people, cultures, norms and the natural world. They pursue any and all questions that pique their curiosity. A steerswoman must truthfully answer any question she is asked to the best of her knowledge. Similarly, any person who is asked a question, by a steerswoman must answer it, truthfully to the best of their knowledge, or be placed under a steerswoman ban after which no steers woman will ever answer their questions however trivial.

In this would be ideal set up, are a group of people called wizards possess magic. They refuse to share information about the magic and use it to wield power over the common folk. Most wizards, who have interacted with steerswomen are under the steerswoman ban for their refusal to answer a steerswoman's questions about magic. However the wizards care little about the ban and continue to withhold valuable information about the workings of magic and the steerswomen resent the wizards. Over the years the steerswomen have learned the pointlessness of questioning wizards and their paths have not crossed in a long time, until Rowan becomes interested in some jewels that seem to be scattered in an intriguing pattern that defies her understanding of falling bodies.

The material of the jewels is strange too and Rowan begins to suspect that it has something to do with magic, but she is determined to understand the problem. In her quest for solving the problem of the fallen jewels, Rowan attracts the unwarranted attention of wizards who consider her a threat and want to eliminate her.

In her quest, Rowan also makes friends with Bel, an Outskirters. Rowan belongs to the Inner landers, who have settled in villages, towns and cities and have local governments. But east of the eastern borders of the Inner lands, the terrain changes drastically, and the region is inhabited by several nomadic tribes called Outskirters. The Outskirters, although considered barbarians by the inner landers have their own social structure and norms.

Rowan and Bel are on a mission to determine what the jewels are, where they come from, and how they got there. They both believe, that the jewels hold the secret to the destiny of both the Outskirters and the Inner landers. But will they be able to find out what they need to know, in spite of the all powerful wizards standing in their way? Read on to find out.

"It's the large things in life that drive us, that we measure ourselves by; but it's the small things, the daily things that - that become precious to us."

A lot of science can look like magic, until you find a way to understand it. Rowan's talent for dealing with abstractions and finding effective analogies, makes the advances of physics from Galilean to modern era easy for anyone to follow and appreciate.

I loved how, what seems like a medival fantasy, turns into a science fiction story, where two incompatible ecosystems compete to maintain their hold on a planet. To me, it seems like, long ago, colonizing humans occupied the alien planet by terraforming it, which involved destroying indigenous life, some of which, unknown to the humans, is intelligent.

After several generations of the colonizing attempt, most of the colonizing humans have somehow lost knowledge and control of their advanced technology, which is now controlled by a minority ruling class, that does not really understand the workings of the tools they use. Will the scientific methods of the steerswomen aid them in really understanding, and regaining control, over the advanced technology rather than merely using it mindlessly? That remains to be discovered in the remaining books. Also who is the mysterious Saldo, the villainous puppet master wizard, who seems to know, control and frighten all?

There are 4 books in the series. The first book was written in 1989 and the fourth in 2004. However the series is incomplete, and leaves you yearning for more. There are two more books promised in the future. I really hope we get to read them. But here is no expected date of completion available yet. In 2015 Rosemary Kirstein released a chapter from the fifth book, she was writing, and that is available here on her blog.

Knowledge is power, seeking knowledge is exciting, but figuring things out is divine!