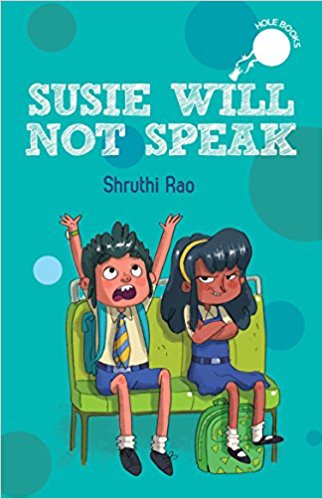 Ages: 5 to 9 years (Level 3 of young reader books from Duckbill)

Susie Will Not Speak by Shruthi Rao, is a story about a little girl named Susie, who lisps. All the kids in the neighborhood tease her and she is miserable. She curses her luck, that her parents chose a name with two s's in it. The neighborhood kids find it amusing, that she pronounces her name as Thuthie, and they shorten it to Toots. They tease her relentlessly for her speech disability. Hurt and upset Susie avoids them and prefers to keep to herself.

Then one day, a new kid, Jahan moves in to the house next to Susie's. He is eager to make friends with her. One of the neighborhood boys have told him that her nickname is Toots. Unaware of the significance, but armed with what he thinks is a friendly fact, Jahan approaches Susie and calls her Toots. It makes Susie very angry and Jahan does not know why.

Jahan tries again, and when Susie learns that he did not know the significance of the cruel nickname, she forgives him and they become best friends. Initially Jahan is eager to play with the other kids as well, but when he hears them make fun of Susie, he tries to stand up to them. The kids are so amused by the hilarity of their cruel rhymes, they don't even notice Jahan's protests. Thereafter Suzie and Jahan stick to playing with each other.

Once Susie loses her temper and gets vindictive, when a grownup teases her, and she gets in trouble for it. The world is most unfair. After this incident, Suzie reluctantly agrees to go for speech therapy. She finds it frustrating and makes no noticeable progress.

Already at the end of her tether, Susie completely loses it, when she learns, that she has to talk about photosynthesis for a class presentation. She decides to stop speaking all together, and uses sign language, or writes things down to communicate.

Can Jahan help Susie get through this rough patch? Will he be able to convince Susie to resume speech therapy? Can he help her recover from years of unkindness meted out by strangers and friends? Read the book to find out.