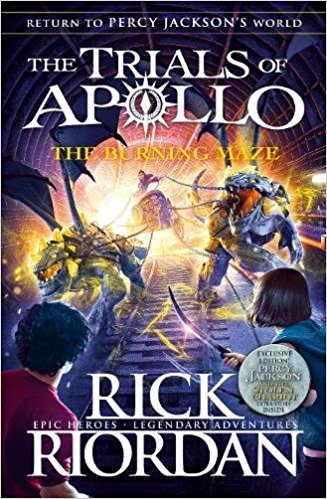 Apollo has been neglecting his oracles and losing control of them. Olympus no longer has a source of prophecy. Zeus in a fit of anger punishes Apollo, by sending him to earth as a mortal flabby teenage boy with acne, named Lester Papadopoulos. Apollo's only chance of returning to Olympus, is to free all his oracles.

At the same time an evil triumvirate of Roman emperors are trying to take over the world and it is likely that one of them has imprisoned the oracle. The first two books in the series disclose the names of two emperors and one still remains a mystery.

In this book Apollo has to free the Erythraen Sybil, who delivers prophecies in the form of crosswords and other word puzzles, and is trapped in a burning maze. Apollo begins this quest with his demigod master Meg McCaffery, the daughter of Demeter, and the satyr Grover Underwood in the labyrinth. After a terrifying encounter with stryxes, as they manage to escape severely wounded and tattered, the labyrinth spits them out in to southern California.

Grover tells them, that southern California has been experiencing an unusual heat wave with forest fires and parched land where even the cacti are struggling to grow. But he tells them that most astonishingly the bit of land they have landed on has a very strong power of nature and that he has been working with the local cacti to help them. He begs Meg to come and see the place and do what she can as a child of Demeter to help out.

Meg, however is struck by a traumatic memory and agrees only reluctantly. Grover takes them to a near by greenhouse of sorts and Meg recognizes it as the mansion of her childhood years made by her father entirely from plants. It was a mansion she and her father had been chased out of and the place was burnt down after which they moved to New York. Meg had no idea who did it or why.

Grover's aim to stop the fires and keep the plants and dryads alive, Meg's thirst for revenge on whoever destroyed her father's home and Apollo's search for the Erythraen Sybil all lead to one place, The Burning Maze. The three team up on the quest full of dangers, and misery, though the tone of the book remains light hearted and absurdly silly because of Apollo's ridiculous commentary.

The trio have help from friends from camp Jupiter and camp half blood along the way. Read on to find out which familiar faces show up. But beware! There is a major shock in store for regular readers. I still can't believe it happened.

Apollo is a little too frivolous and almost churlish sometimes, like a spoilt kid, even at moments when one would expect him to be more empathetic after his experiences. Don't get me wrong, he has made progress, but sometimes it feels like he keeps sliding back to his old self, not because his character requires it, but so he can be funny. While the previous book struck a good balance between his frivolous callous godly side and his growing humanity, this one fell short. In the end though, he does seem more sombre.

Although the book is very amusing and informative, it does not make a strong emotional connect till about two thirds of the way through.

Penguin sent me this book for an honest review.