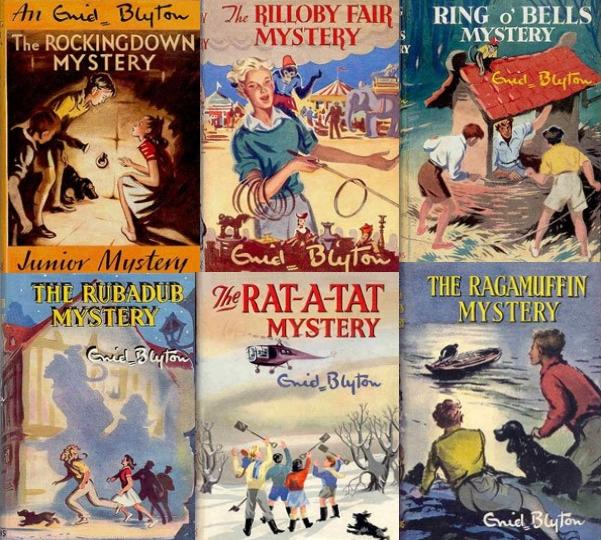 These books are not easily available anymore, so see if you can find them in a library or a used book store. Here are some useful amazon links:

Buy in the US from Thrift Books. I haven't personally used this store. Just found it by googling.

The four main characters in the series are Roger and Diana who are siblings around the age of twelve, their younger orphan cousin Peter, usually known as Snubby, and Barnabus, a circus boy who is almost always called Barney.

Snubby is a bright, mischievous and cheeky orphan who lives with a variety of relatives, but Mrs. Lynton, mother of Roger and Diana, is his favorite aunt and he particularly likes spending his holidays with Roger and Diana. Snubby's faithful companion Looney is a lovable black spaniel who creates havoc wherever he goes.

Barney is a circus boy Roger, Diana and Snubby encounter in the first book during a holiday, when they are all staying with Miss Pepper, Mrs. Lynton's old governess. Miss Pepper too regularly features in the mysteries.

Barney too is an orphan. His mother died some time ago, and his father is unaware of his existence. So Barney has to fend for himself by working intermittently for fairs, circuses and shows. Barney is intelligent, resourceful and well mannered and endears himself not only to the children but also Mr. & Mrs. Lynton and Miss Pepper. Barney has no extended family he knows of and considers Roger, Diana and Snubby to be his closest friends. He is thrilled to be welcomed so warmly by their family and friends. But he does hope to find his father someday. All he knows about his father is that at some point he acted in Shakespearean plays. Does Barney really do something about finding his father or is it just something he fantasizes about? Will he ever meet his father? Read on to find out.

A most unusual and entertaining character in the stories is Barney's most faithful friend, a monkey Miranda, who also makes herself useful at the circuses and fairs where Barney works.

The Rockingdown Mystery is about the exciting secrets the children unearth while exploring an old house. Are they the only ones who know it's secrets? And what is the man posing as their tutor really up to? Read on to find out what exactly is happening in this abandoned old house and why the local maps make no sense.

The Rilloby Fair Mystery is set in a town close to where Roger and Diana live. The papers repeatedly report the seemingly impossible thefts of old and valuable documents from vaults and locked rooms. Mrs. Lynton's uncle, an expert in such documents is greatly disturbed by these thefts and comes to stay with her to calm himself and get some rest. But instead the baffling mystery follows him and he and the Lynton kids and Snubby and Barney all fall right in to it. How do they figure out the ingenious methods employed by the thieves and who or what is the Green Hands Gang? Well you need to read the book to find out. This is the funniest story in the series.

The Ring O' Bells Mystery is set in an old village named after a big old house named Ring O' Bells hall which has been turned in to a show place. There are many strange legends that surround this ancient mansion, most exciting of which is it boasts of a secret passage. The children are disappointed to learn that only a short way from the entrance, the roof of the secret passage has caved in. Another peculiar aspect of the mansion, is a set of bells with no chord to pull them. Yet the bells are said to ring on their own to warn everyone about approaching enemies.

The Rubadub Mystery is set in a sea side inn, in Rubadub village. The sea there has a very interesting whirlpool and a blow hole. What fascinates the children even more is the secret submarine base carrying out fascinating experiments causing occasional explosions. But someone is leaking precious government secrets and the police suspect someone from either the local fair or someone living at the same inn as the children. Barney meets an old friend of his mother. Can this person help him find his dad? Can the children figure out who the traitor selling military secrets to foreign governments and sabotaging the experiments could be? Read on to find out.

The Rat-a-Tat Mystery is set in a far away cottage in the hills where the children go to spend their winter holidays tobogganing and skating. The cottage had a heavy and loud lion shaped knocker and the local legend is that it can be heard when traitors arrive. The children spend a great day tobogganing, having snow ball fights, building a snow man and an igloo. B But then at night things get scary. Someone uses the knocker and it so so loud, everyone wakes up terrified. The next day they investigate the area in front of the main door which has never been used since they arrived since they always use the back door. They see a set of large shoe prints going towards the cottage door but not another set going away from it. Later in the day stranger things happen. The snowman the children made suddenly disappears and then Mrs. Tickle, the lady who cooks and cares for them, sees the snowman walking in front of the kitchen window.

The children and Mrs. Tickle want to report the incidents to the police but they are snowed in and cut off from the rest of the world. In the night Looney hears some strange noises and wakes Snubby up. Snubby decides to investigate. He finds two grown men in the house taking boxes out of the cellar. The men are angry at being discovered and lock him away in the cellar. Who are the men? What's in the boxes? Where have they hidden the boxes after taking them out of the cellar? Read on to find out.

The Ragamuffin Mystery is set in an old ruin converted in to an inn at a secluded part of the Welsh coast. The inn is run by the ambitious Mr. Jones of humble means who has always dreamed of owning the ruin. He is unexpectedly funded by two well known wealthy academics, who visit regularly. No doubt the views from the rooms are amazing, but what do the wealthy Londoners see in the old ruin to visit so regularly? Why does one of them get so angry when he sees Snubby reading a coded letter from a school friend? The inn-keeper's strange little boy followed everywhere by his pet goose shows them a tunnel that becomes visible when the tide is low. But where does the tunnel lead? Read on to find out.

In recent years Enid Blyton's books have been criticized a lot for racism. As a feminist this book made me cringe a little. It's always Diana, the only girl in the group of children, who is shown doing chores like making beds and helping with the washing while the boys usually only help with outdoorsy stuff or machinery. She is also left out of the more risky adventures often by her own choice, and at other times because her brother and Barney insist on it, for her safety. May be it was because I first read the Five Find-Outers mystery series when I was much younger, but I don't remember it being as gender biased as this one.

While this bothers me, I am also aware that fixed gender roles were a common reality in the time these books were penned. So the books are representative of the existing society. Some people believe we should not let our kids read such books because it reinforces the sexism that persists in modern society. I don't believe we should hide from our past, but that we should try to learn from it. I believe that we should let our kids read these stories that are quite remarkable in many ways. But along with the merits, we should also point out the short comings and discuss the problematic issues or racism and sexism openly with them and show them how times have changed and how much more needs to change and can change in the years to come.