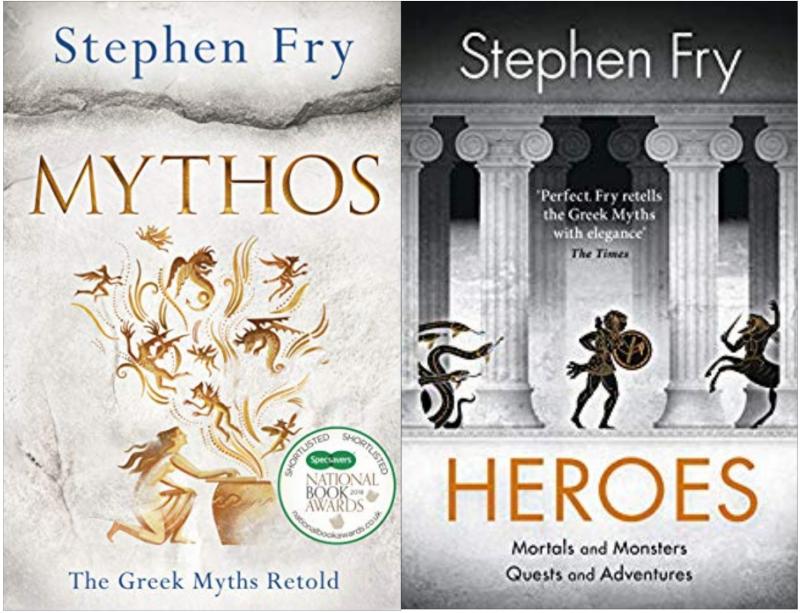 Buy Mythos and Heroes from Amazon India available in Kindle and print versions.

Greek and Roman Mythology is everywhere. Even if you have never actually read any, you still probably know some. The Greek Gods, Heroes and legends have firmly planted themselves in the English language. Jupiter is the Roman version of the Greek God Zeus and the largest planet in the solar system. Phrases like opening Pandora's box, Herculean task, or words like echo, aphrodisiac, narcissistic are rooted in the fascinating stories of Greek mythology.

A few years ago I thoroughly enjoyed reading the 10 Percy Jackson et al books, and some time later The Trials Of Apollo Series. Riordan has done such a great job of embedding his stories in the world of Greek and Roman mythology, that sometimes it is difficult to tell which parts of the stories come from mythology, and which parts are exaggerated in Riordan's fertile imagination. Although, some research on Wikipedia at that time made it quite clear that embellishment can hardly make Greek mythology more bizarre than it already is.

Recently, during the #NinaAndNana mythology month, I had to look up some Greek myths and that left me thirsty for more.

That's when I came across Mythos and it's sequel Heroes, by Stephen Fry, where he strings the various and numerous Greek myths and legends together in to two novels, with somewhat coherent over all story arcs.

Mythos briefly deals with the origin of the world, the birth of the Titans, monsters, giants, and later, the Olympians. After glossing over the war in which the Titans are overthrown by the Olympians, it focuses on the family drama of the Olympians. How many Olympian Gods are there? Who are they? How did they come to be? How many of the immortals made it to Zeus's inner-circle of governance? What did they stand for and how did they feel about each other? How did the immortal divine beings keep themselves busy and entertained?

Powerful as they were, Greek Gods were still susceptible to insecurities. Jealousy, pride, envy, vengeance were as much a part of their divine personalities, as they are part of being human, making the family drama of Greek Gods just as convoluted as a soap opera, but far more bizarre with all the shape shifting preceding copulation.

Zeus the Olympian boss soon, started finding his interactions with Titans, Olympians, Nymphs, Oceanids and animals insufficiently satisfying. He longed for some interesting toys. He approached his best friend, the Titan Prometheus. Prometheus along with Athena helped him create the first humans. Prometheus, eventually, became a champion of humankind and was brutally punished by Zeus for it. Read the book to find out the intriguing story of what caused Zeus to be so cruel to his best buddy.

In the early days of humanity the Gods roamed freely among the humans, interacted with them, and mated with them. The earliest rulers could claim divine lineage.

The interactions between Gods and humans led to the age of the Heroes which is the subject of the second book. Heroes were mortal men of extraordinary abilities. They distinguished themselves by accomplishing a series of seemingly impossible tasks, which made the world a better place.

Heroes and other humans, sometimes, unwittingly or unknowingly got caught up in the rivalries and jealousies between the Gods and suffered for it. The Olympians were often petty, jealous and greedy. Any devotee of Artemis was likely to incur the wrath of her rival Aphrodite. Artemis herself was petty and unforgiving. The Gods, especially Apollo, despised being outdone and such hubris was cruelly punished. Athena, for all her wisdom, wasn't above being offended by the idea of a mortal being more skillful than her.

Heroes themselves almost always had tragic lives, with the exception of Perseus. Mortals, who somehow got entangled with the Gods, usually met with some terrible fate, often for no fault of their own. One exception was Pygmalion, whose life was improved by Aphrodite's meddling.

In many ways it was a world so unlike our own, with miracles, magic, shape-shifting gods, strange hybrid creatures, monsters and heroes, but yet it seems that the Gods were quite human in their insecurities and pleasures making the stories timeless and engrossing.

What I Liked About The Books

The mother of all soap operas penned down in style!