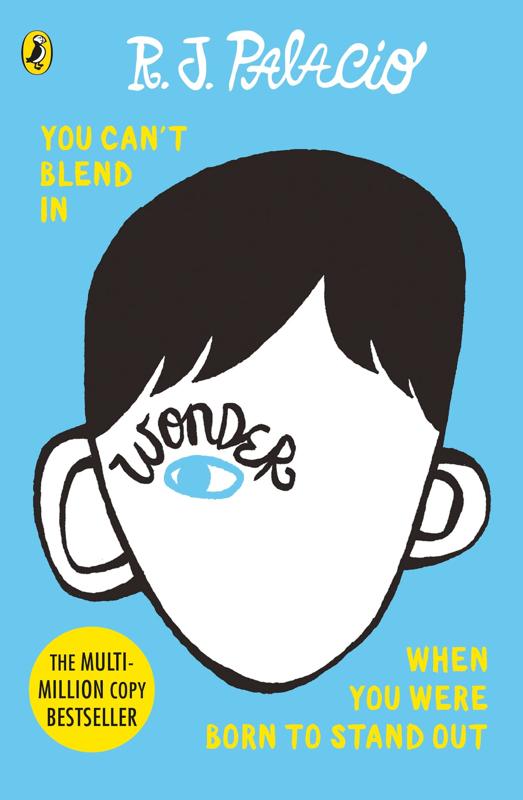 I had heard a lot of positive things about Wonder by R. J. Palacio a while ago, but the subject put me off, because I expected the book to be preachy and sanctimonious. I got the feeling people said nice things about the book, simply because it was politically correct to do so. A week ago, I noticed Wonder among my older daughter’s new books for the upcoming school year.

She dived into it right away, and though initially skeptical, she was soon sucked into it. My daughter and I have fairly similar tastes in books, so I decided to give it a shot and I'm so glad I did.

Wonder is a book following a year in the life of August Pullman, a boy born with a facial deformity that is severe enough to frighten most people at first glance. A reflex cringe or gasp is hard to suppress, and even those who have been warned what to expect are often shocked by the extent of the deformity and find it difficult to avoid awkward glances.

In addition to enduring looks of shock and revulsion every time he meets someone new, dealing with whispers and name calling, Auggie has several medical problems including a cleft palette and hearing problems due to improperly developed ears and ear canal. He has had to have several surgeries over the years, requiring him to be home schooled.

At age 10, when his surgeries are all complete, his mother believes it is time for him to join a regular school, but everyone in his family including Auggie knows it is going to be a difficult transition. What will the kids be like? How will they react to his face, and how will Auggie handle their reactions? Will he be bullied? Will he make any friends? Read on to find out, as the book takes us through his first year of middle school.

The book presents various events in Auggie’s first year of middle school from the perspective of many different kids.

Julian’s parents initially come across as insensitive, heartless, rich people throwing their weight around to get what they want, because they can. However, The Julian Chapter shows us that rich parents are no different than any other, in how they feel. The only difference is, when rich people flail at their insecurities, in their desperation they can cause a lot of damage, for they have the power and resources to hurt a lot of people.

I liked how the author shows that Auggie’s family although supportive and loving, are unable to treat him as just another kid, in spite of the fact that besides how he looks Auggie is indeed a completely normal kid. Their over protectiveness stems from all the early surgeries Auggie had, making him very vulnerable in early childhood. As they struggle to help him become independent, we see how his friends, over time, get used to his appearance, and are eventually able to see the person behind it. They appreciate his sense of humor, intelligence and most of all, lightheartedness in spite of the hand (or perhaps face) he has been dealt. In time, Auggie gains confidence and becomes less insecure about his appearance, which is an essential part of being the normal kid he craves to be.

Jack Will's perspective shows that good people too make mistakes, but they find the courage to fix them, and the experience strengthens their character.

The book deals with a sensitive and difficult subject with elan keeping you hooked until the last page. But it must be hard to dive into an awkward subject like this. So I urge you to stick with the book even if you find the first chapter a tad silly. The chapters that follow make it more than worthwhile as the author becomes more comfortable with the characters.

More than Auggie's challenges, this book makes you wonder, how you would react to a face like his. Would you cringe? Is that so wrong? If you did cringe, then what would you do next? Would you feel awkward, not knowing if it's rude not to make eye contact, and yet wonder if it seemed like staring if you did make eye contact? Would you eventually get used to his features and stop noticing them? In short, the book makes you introspect and ask yourself some uncomfortable questions that will help you get to know yourself better. Finally, it pushes you to examine if you have a tendency to rationalize away your mistakes, or if try to face them head on.

A face that makes you WONDER, what your own insides are made of.