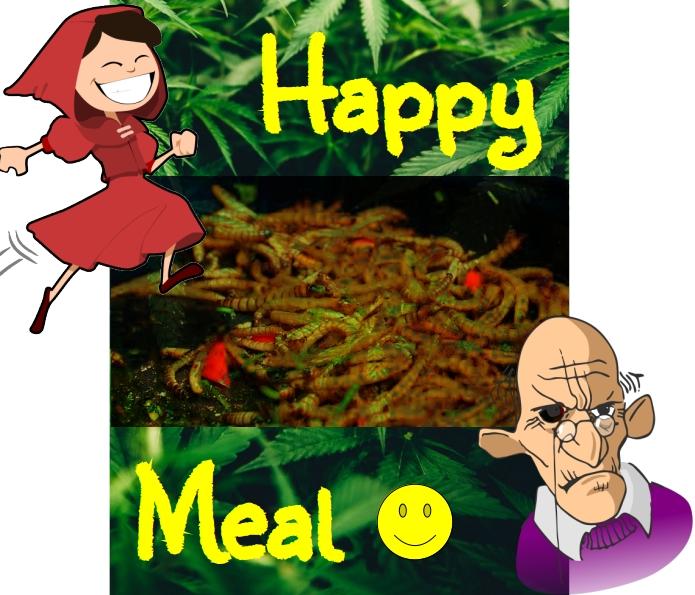 Nina: Nana the European Union just approved a new high protein, low fat food item as safe for human consumption. Can you guess what it is?

Nina: Close enough, Nana. Actually, they approved meal worms to be served either whole, or in powdered form.

Nina: Haha. Don’t you mean gagh? The Klingons knew it all along. They eat live worms.

Nina: Then I wonder what you’ll say about Americans studying the safety of python meat for human consumption. The growing python population in the Everglades is becoming a nuisance to both humans and wildlife. So someone came up with the idea of python being served in restaurants, but they have to first ensure that the mercury levels in python meat are not too high.

Nana: Enough about slithering suppers. Is there any happy news at all, in the world of gourmet foods?

Nina: Actually, there is. A restaurant in Thailand is serving Giggling bread and Joyful dancing salad.

Nina: Nana, you misunderstand. This has nothing to do with worms. Cannabis leaves, stems, stalks and roots were officially removed from Thailand's narcotics list. Now, any part of the plant except for the buds are permitted for consumption. So some restaurants in Thailand are planning to include parts of cannabis some special dishes.

Nina: Haha. Nana, seems like the mere mention of cannabis improves your mood. How would you like to hear about an out of this world gastronomic experperince?

Nana: What? Are we eating alien bugs now?

Nina: No. Astronauts used a 3D bioprinter to print meat in the International Space Station. Lab grown meat has been produced on earth, but this was the first time it happened in space.

Nana: Holy cow in holy space! That is amazing!