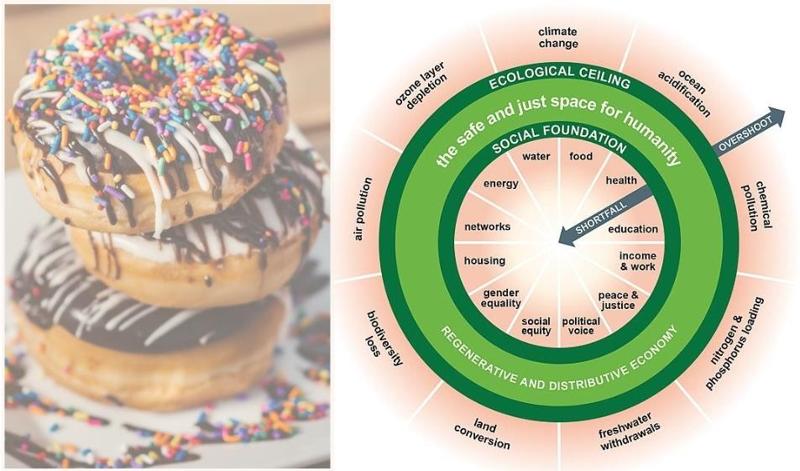 Left image by Kobby Mendez on Unsplash and right image designed for Kate Raworth licensed under CC BY-SA 4.0 for distribution.

Nina: Nana, I’m craving a doughnut. I haven’t had a single one since lockdown began in March last year.

Nana: Well shouldn’t you have forgotten about them, then? What triggered the craving?

Nina: I was reading about doughnut economics.

Nana: You must have better things to do than read about the demand and supply of doughnuts, and contribute to the demand.

Nina: But this is about the environmemt and climate change Nana. I thought you cared about it.

Nina: No Nana. Doughnut economics is an alternative to capitalism. It is supposed to promote a balance between environmental and economic objectives of nations when devising economic policy.

Nana: Nonsense. Don’t you remember the Percy Jackson books? Monster Donuts are about as capitalistic as it gets.

Nina: Forget about doughnuts for a second Nana. This has nothing to do with the pastry. It’s just an economic model whose diagram looks like a doughnut.

Nana: You mean like a topological doughnut that morphs in to a coffee cup and back?

Nina: What? No. Nothing so complicated. It’s just a thick ring. The ring is the safe space for ecologically prudent economic growth and development.

Nana: It’s annoying how western countries harp on about the environmentally responsible development now that we are trying to develop, when they themselves were criminally irresponsible when they began to develop. Remember, how Bartlet from West Wing mentioned the principle of differentiated responsibilities. He said:

I think what's lunacy is a nation of SUV's telling a nation of bicycles, that they have to change the way the live before we'll agree to do something about greenhouse emission.

Nina: Actually Nana, this model encourages developing countries to focus on economic growth, albiet taking some measures to slowdown or reverse climate change. It places the bulk of the burden of ecological responsibility on developed consumerist nations. Developing nations are urged to progress outward from the hole into the ring, while developed nations currently outside the ring in terms of ecological exploitation, are being asked to retract into it.

Nana: Now there is an idea. Just like you should retract the amount you talk.

Nina: Whatever. The pandemic has a silver lining. Doughnut economists suggest, that as governments provide stimulus packages to revive the post COVID economy, they should incentivize ecologically responsible initiatives.

Nana: Well, if being a doughnut economist is your life ambition, I’ll say you’re halfway there.

Nina: What do you mean Nana?

Nana: You’re already a nut, so when you start making some dough and spending it you’ll complete your identity. Haha. Hoho.