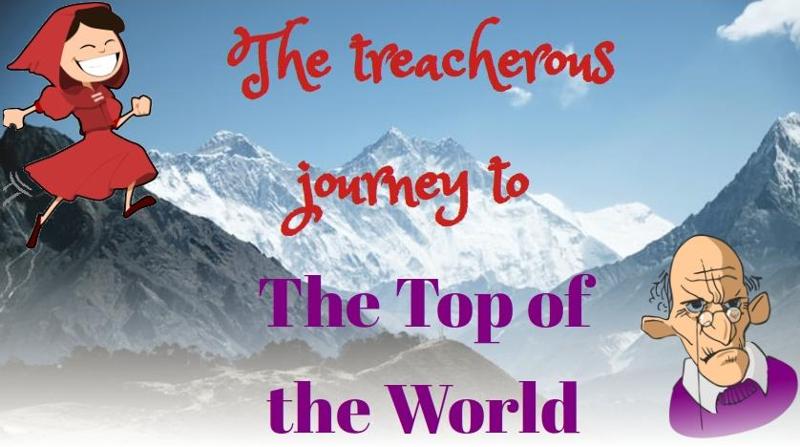 Image made using photos by Rohit Tandon on Unsplash

Nina: Nana did you ever want to climb Everest?

Nana: Did you ever want to sit in in a freezer for a few days?

Nina: Touché. But lots of people want to climb Everest, or at least, reach its base camp. Did you know that just the base camp is over 17000 feet over sea level, and at that height the oxygen is already as low as 50% the amount it is at sea level?

Nana: Yes. To get there one has to climb in stages, so as to acclimatize to high altitudes and diminishing oxygen levels. But the peak is at 29017 feet. I wonder how thin the oxygen is over there.

Nina: Actually Nana, the rock height was estimated to be 29017 feet, but the peak is covered in little over 11 feet of snow, so the snow height was estimated at about 29029 feet. Nepal and China argued about which should be considered the actual height. However the most recent estimate as agreed upon by both Nepal and China is 29031.7 feet, and that is the officially recognized height of Everest.

Nana: That’s interesting. I can see why the rock height might seem like the logical one, as it is presumably less variable over time, but if the snow-ice layer is indeed over 11 feet deep, then perhaps it deserves inclusion, as anyone climbing Everest would have to climb up the the height which includes the snow-ice layer.

Nina: Anyway, you were asking about the oxygen level, Nana. At the summit it is just 33% of the value at sea level.

Nana: I suppose it is quite impossible to climb Everest without supplemental oxygen, then.

Nina: Actually, that’s not true. On 8 May 1978, Reinhold Messner and Peter Habeler became the first known people to reach the summit of Everest without supplemental oxygen. Before that, it was believed to be impossible.

Nina: It is, Nana. The lack of oxygen can cause the brain to swell, the heart to thump, blood to thicken, the lungs to leak fluid, and digestion slow down. It can even cause transient blindness. The swelling of the brain diminishes cognitive function which results in reduced co-ordination and stumbling. Imagine coping with these problems while dealing with treacherous terrain and steep cliffs.

Nana: Sounds quite impossible. How did he do it?

Nina: The key is to do it slowly, and acclimate properly at every stage. Like the tortoise, slow and steady. See how well you are doing, Nana.

Nana: Whatever do you mean?

Nina: You haven’t complained once during this discussion. I think you are finally getting acclimated to me.

Nana: Never! Get lost. Out.

PS: Here is an interesting article about the turning trash into art at the Everest base camp.