What was the last letter to be added to the English alphabet? Can you guess?

If you guessed Z, you were wrong dude. Want to try again? Never mind. The answer is J. Yup, that's right. J as in Jesus and Judas. Is it a co-incidence that their names both started with J? Hey wait, two James, a John and possibly a second Judas/ Thaddaeus/Jude all had names starting with J. Huh! So perhaps it wasn't such a big co-incidence.

I know what you're thinking. J may have been a late bloomer in the English alphabet, but it certainly got popular fast.

Nope. Wrong again. J did not even exist till the fifteenth century and these guys were, well, they hung around in the first century. So what in God's name (and I mean that quite literally), is going on here?

Research over the years has uncovered that Jesus, most probably started out with the name Yeshua, which became Iesus in Greek. Then, much later, when the letter J was born out of the letter I, Iesus became Jesus and here we are.

Yes, yes J was actually born from I. Don't look so surprised. They are next to each other in the alphabet, aren't they? Mama likes to keep and eye on her baby. According to Wikipedia the letter J began as a swash letter, to denote the end of a series of ones in Roman numerals. Gian Giorgio Trissino was the first to distinguish I and J, thus making him the father of the letter J.

Now let's see how this little factoid is causing trouble in the Nina and Nana household. 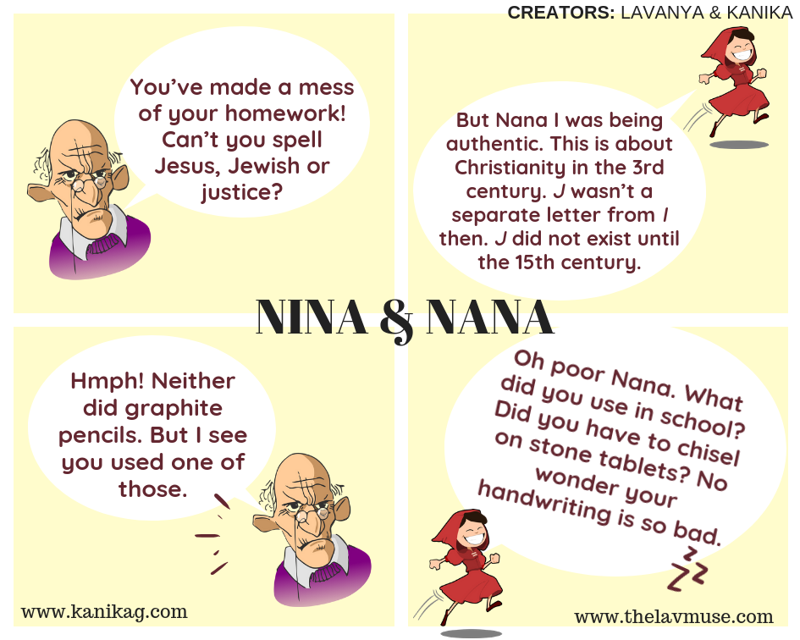