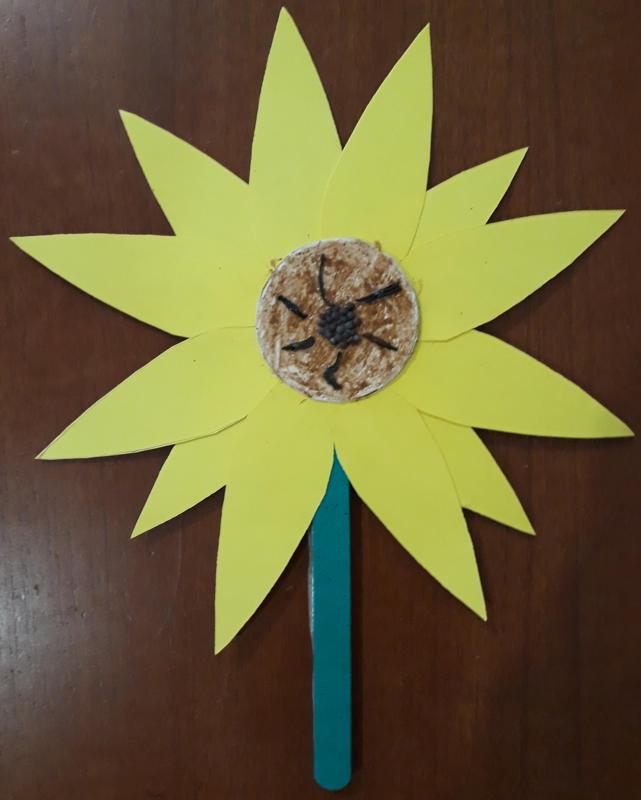 The older one had to do make a flower and then talk about it at school for show and tell. So we discussed flowers. Just before they started the plants theme at school, they were learning about the solar system. So may be that's why the first flower that came o my mind was the sunflower. And as soon as I thought about it I realized it would be a great idea for show and tell, because it would be easy for us to make together and she would enjoy learning about solar tracking of the sunflower, also known as heliotropism, and telling her friends about it in school.

What we learned about sunflowers

As I did some research on sunflowers, I found some interesting facts and theories. One site claims that not all sunflowers follow the sun. According to the site wild sun flowers growing on the roadside face in random directions, although their leaves exhibit solar tracking.

But even the cultivated or domesticated sunflower does not follow the sun once it is mature. Only the buds and young blooms exhibit solar tracking. The buds have soft stems. During the night the west side of the stem grows causing the flower to slowly towards the east and at sunrise the young blooms face east. Then during the course of the day the east side of the stem grows causing the flowers to slowly bend westwards following the sun in it's journey across the sky.

Scientists have found that if external constraints prevent the flower from following the sun then the resulting leaves and flowers tend o be about 10% smaller.

So we learned a lot about sunflowers together, and my daughter had plenty to talk about. Now the only thing left, was to make a sunflower, and we had a lot of fun doing that.

How we made the sunflower

I started with an A4 sheet of yellow chart paper and drew a thin petal along the shorter edge. Then I folded the paper like a Chinese fan, so I could cut out multiple identical petals. My daughter cut out a circle from an old greeting and colored it brown with a crayon. Then we arranged the petals around the circular piece and taped them on from the back. We used two layers of petals, with the second set of petals being placed in the gaps between the petals in the first layer.

Then we turned it around and put a blob of Fevicol at the center of the brown side of the circular card piece and stuck on a few mustard seeds. We also used Fevicol to stick on some tea leaves, to make the center look realistic. It would have probably been better to stick on more tea leaves.

For the stem we pasted green foam pieces shaped like ice cream sticks, that we found at a stationary shop, on to an ice cream stick to make it firm with a soft feel.

We started out with a mundane art activity for home work and ended up learning a lot of interesting things about the growth of sunflowers. We had fun using various kinds of materials lying around the house, to create interesting textures, that gave parts of the flower a nice 3D look.