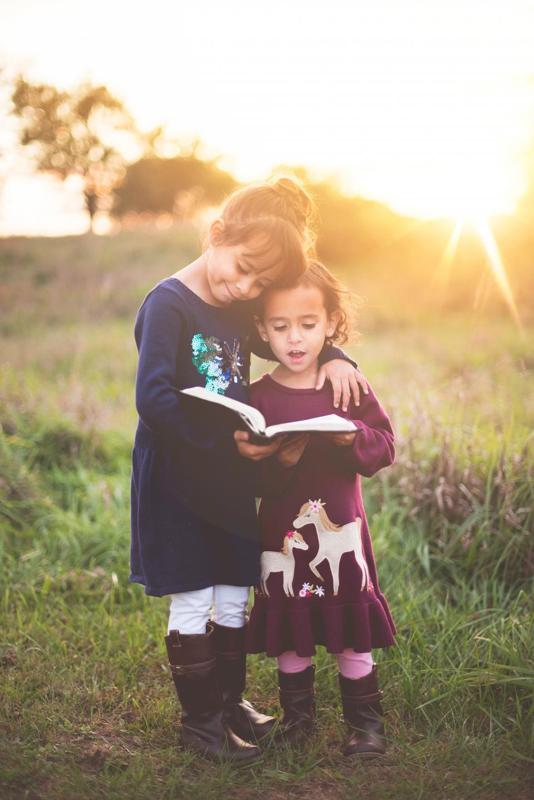 When I was pregnant with my second child, a few mothers told me that, the older one would get very jealous at the arrival of the new baby. We are a nuclear family. So at that time it was just papa, me and our only daughter.

Papa works from home and I am a SAHM. My daughter was used to getting my full attention. We did a lot of stuff together. Cooking, writing books, evening walks, playing with soap bubbles, inventing and playing games, watching educational videos and children's shows, making birthday cards, cleaning out cupboards and drawers, finger painting, crafts and what not. Papa too would give her attention whenever needed. They had a special dedicated daddy daughter hour every evening.

I was worried about how the second baby would fit in and affect the wonderful family dynamics we had going. All the time and attention the little one would require, would have to be stolen from the time I would have spent with her older sister.

Some reading I did on the subject suggested I involve the older child in the process of raising the younger one so she would not feel excluded or unwanted. This idea was brilliant.

So even though my older one was born in a hospital, I chose a small nursing home with a good reputation the second time. The reason was that, the hospital had rigid rules about visiting hours and allowing children. The nursing home was far more relaxed in these rules. So the older one could visit me and spend most of the day with me and her new born sister in the nursing home.

Right on day one, we sat our older daughter, barely 2 and a half then, safely on a bed and encouraged her to put her sister on her lap. Her face lit up, and she felt love for the baby, instead of jealousy.

At every step we have tried to involve our older daughter in caring for the younger one. She would help with handing us baby wipes during diaper changes, and sing to the baby if she got fussy when her clothes were being changed. From the very first day the baby was given a bath at home, we let her older sister participate. We let her soap the baby's hands and feet and she did it so gently and carefully.

When the younger one started solids, the older one was keen to feed her, and we encouraged it. Sometimes, when the baby cried, her older sister would open her water bottle and hand it to her. If the older one thought her baby sister was hungry, she would ask me if she could feed her baby sister some cheese (the baby's favourite food besides chocolates).

Once the baby could walk her older sister would hold her hand and help her get confident. They would walk around holding hands, while the older one sang peppy songs and the younger one keept tune going aaaa aa aaaaaaaa.

One day I was cooking, when the younger one woke up in her crib. She was crying but I could not leave the stove immediately or the food would get burn. So my older daughter went and helped her out of the crib. It was a struggle for her but she did it very carefully. The younger one was so grateful she called her mama. The older one was excited. The younger one could only say Mama and Papa at this point. The older one was trying to teach her to say didi but it was too difficult for the baby. My older one came running to me and said “Mama, baby called me mama because I helped her get out of the crib. Amazing na?”

I said, “You look after her so well. She thinks you are her mama too.”

My older daughter glowed with pride and told this story to all our friends and relatives.

Just a few days ago, the baby finally learnt to say didi. Didi was delighted. Baby now understands the sentence “Go give didi a hug.” She promptly waddles over to didi and holds her in a tight embrace leaning her head against didi for a whole minute. It is an adorable sight.

Of course, the two sisters fight over toys and goodies, but they are secure in the love their parents have for both of them. The younger one sometimes gets a little jealous when the older one is sitting on my lap and tries to push her away. But without my help, the older one has come up with a brilliant solution to this. She says “Come on baby. Lets, you me and mama do a group hug.” If papa is around he joins in too.

I do love these group hugs. Having the two of them is more than double the joy of having one, because their interactions are just priceless.