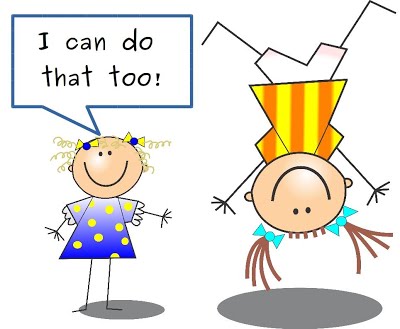 I often write about the interactions between my two little ones. So far the younger one had been eager to accept help fom the older one and watch in awe as the older one does things that she her self can't yet do.

But that is changing quickly. The younger one is now a year and a half and quite adept at walking , running and now climbing furniture. She also wants to do everything her sister does. And I mean everything.

The other day the older one go a small scratch on her arm. So she asked me to wash it in Savlon water. As soon as I did it, the younger one extended her arm and said “Me?”

Of course none of this made any sense to her. She patiently listened and then extended her arm again and said “Me?”, her big round eyes looking at me expectantly.

I wet a cotton ball in water pretended to pour Savlon on it and rubbed her arm with the wet cotton ball. She gave me a satisfied smile and waddled off to play with her sister again.

But unfortunately her imitation does not limit itself to these funny stories. A week ago the older one learned to climb to the top of the sofa chair and lower herself of the back of it on to the ground. She is short enough that it is fun for her, but tall enough that it is quite safe. The younger one however must do what she does and it is definitely not safe for her. She would fall with a thud while climbing down and usually land on her bums.

Both of them were enjoying this game when the older one decided she could jump down instead of climb down and that was okay for her. But then, of course, the younger one had to imitate and she had a bad fall.

The younger one doesn't want to wear her diapers, because Didi doesn't need them. She wears Didi's clothes, much to didi's annoyance, every time she finds didi's cupboard open. On the bright side, didi is getting better at remembering to close her cupboard after using it.

It is like the age gap is visible to everyone except the younger one. Though it does become conveniently visible to her, when she can't reach the pedals of her cycle and needs me to push.

Occasionally the older one too loses sight of the age gap and imitates the silly antics of the relatively clumsy younger one. Sometimes she does not appreciate that there are higher expectations from her, like her little sister is no yet expected to put all her toys away, when she has finished playing.

Then there are times it becomes invisible to me too. Like, when I see them hugging or walking hand in hand, or splashing each other with water, or sharing their chocolates. Actually then I have a cuteness overload and fail to see anything else at all.