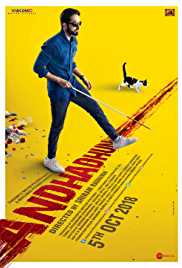 Many of us like to believe in Karma, cosmic retribution, something to help us make sense of a complex and chaotic world. We hope that we get what we deserve, for that gives us a measure of control over our lives.

Perhaps to some extent this is true, for our experiences, guilt, regrets, efforts and achievements shape how we interact with the world and how we interpret and react to various situations. What some may see as a set back, others may see as an opportunity.

But the idea that our lives could change drastically at any moment without the slightest warning and there is nothing we can do to prevent it, is terrifying. We all know it’s true, but we live in denial, simply to survive. How can we plan anything at all unless we ignore this idea and simplify our understanding of the future by taking in to consideration only the most likely course of events?

Andhadhun emphasizes the uncomfortable idea that even when we actively take charge of our lives, we can be completely derailed by arbitrary, unforeseeable events.

It’s lighthearted take on freak tragedies is fitting, for there is little to learn from these situations. Accepting them with as much good humor as one can muster, and moving on to figure out how to deal with the situation rather than fretting over it is the best course to follow, as the movie illustrates.

Akash is a musician. In search of inspiration, he simulates the experiences of a blind man by using contact lenses that make him effectively blind. A bizarre concatenation of events coupled with his faked blindness puts him in a prickly situation, where he must choose between his own safety and a clear conscience. The harder he flails to get out of the trap he finds himself in, the more tightly it ensnares him.

Before long he is neck deep in hot water. Believing that things could hardly get any worse, he throws caution to the winds. With nothing to lose, or so he thinks, he unleashes his only weapon, a double edged sword. But like a man who likes to believe he can control the untamed and aggressive appetite of fire, he woefully underestimates his opponent.

Will he be able to untangle himself from this sorry mess? Will he finally catch a break and will fortune finally swing his way, or will the net ensnaring him relax its grip if he stops flailing? Watch the movie to find out.

Full of ironies and dark humor, the movie suggests that the only way to get through tragedies is to not take them too seriously. When life smacks you on the face or kicks you when you’re down, there is no point in lamenting the unfairness of it all. The only thing you can do is figure out your next move and hope it works.

I loved the title of the movie. The entire movie is about andhadun, desperate shots in the dark, or Hail Marys one hopes will work and then falling back on improvisation when it doesn’t. But the protagonist playing at being a blind musician, and this farce most unexpectedly landing him in the hot water that leads to his desperation, is a brilliant pun.

Tabu does a fabulous job of treading on the thin line separating the ruthless acts of self preservation in desperate circumstances from the behavior of a psychopath. The original crime is not premeditated and after that she is simply struggling to stay afloat, but how can she not be a psychopath if she is not guilt ridden? Perhaps she is so caught up in the fight for survival, she hasn’t had a moment to think about guilt. She walks the tight rope between the two possible interpretations of her behavior with grace and elan.

Akash the protagonist, is no hero. In fact, he is a coward. Just like most of us who shy away from getting involved in roadside brawls to correct an injustice, he too prefers the easy way out rather than doing the right thing. He wants to lead a quiet life and follow his simple dreams. Instead, kicking and screaming, against his will, he is embroiled in intrigue and drama, and he can’t seem to find a way out of.

In spite of providing so much food for thought, the movie keeps you guessing at the edge of your seat, and is full of twists, as any good thriller should be.

It's difficult to know when to struggle and when to let go, but even harder perhaps is to switch gears from one approach to the other when the chosen method is clearly not working. Life often requires us to compromise, be flexible and to adjust between different approaches. Learning to change tunes is an important skill when maneuvering through difficult times.