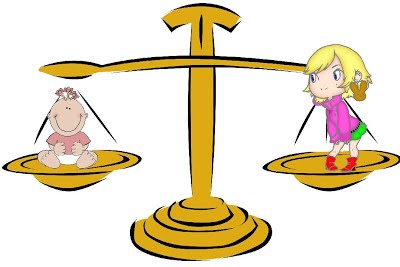 Recently, I was having a conversation with my best friend and stopped to react to something my younger daughter did. With 2 daughters under the age of 4, I am used to being interrupted. I barely noticed the break in conversation and continued to talk like nothing had happened. So I had no idea what my friend meant by “I can see which daughter is your favourite”

“Huh? Where did that come from? And which one are you talking about?”

Let me go back in time a little to explain this. My best friend had been a very big part of our lives, when my oldest was born. She lived close by and spent one day a week with me and my baby. To my daughter, she was the doting masi. She has always remained super close to my older one. Even though she moved out of the city when she got married, she still has regular skype chats with us an until she has her own child my daughter will probably be her favourite. But she moved away before my second one was born and did not ever get to know her as intimately. Still, we are very good friends, and she is very fair. So why did she accuse me of playing favourites with my kids?

It's simple. She said my response to something my second one said or did was much kinder than it had been to my first one in the same situation.

But is it really that simple to be a fair mom? What exactly does it mean to be a fair mom? Does it mean I should treat both my kids in exactly the same way? Come on! They are siblings, not clones. So they have different personalities, different responses to similar stimuli, different strengths and weaknesses. They have had different experiences and are at significantly different stages of their lives. Now do you see how complicated being a fair mother is?

I always wanted to be a fair mom. Ever since I decided to have a second child this is something I have struggled with. But it is not easy. And here is why:

I made some mistakes with the first kid. Should I repeat them with the second one just to be a fair mother, even though I know better now?

How can I give my second baby the same kind of attention I gave her sister at her age when she was an only child?

Would using the same parenting techniques on the 2 kids be fair even though their responses to them are so different?

So I reiterate, what is a fair mother?

Finally a fair mother is human and can make mistakes. But she is not afraid to apologise for them. An outsider can rarely judge the complexities involved in making decisions that are fair to siblings. So a fair mother considers their observations, but only acts on them if she concludes it in in the best interest of all her children. After all mother knows best ;)