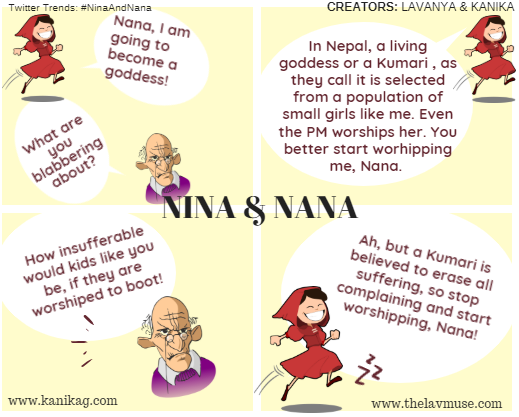 Most little girls want to be a princess. But not Nina. As you jus read she's far more ambitious. She wants to be a goddess!

How is that possible you ask. Well she would have to go to Nepal and belong to the Shakaya caste, because an ancient Nepali legend reveals that the Nepali king Jayprakash Malla used to play a dice game called Tripasa with his friend the goddess Taleju. Taleju insisted that the meetings were to be a secret. However one day the king's wife got suspicious of his late night meetings and discovered that he was meeting Taleju. Taleju was furious. She told the king that if he ever wanted to find her again, he would have to look among the young girls of the Shakaya caste of the Newari community, as that is how she would be make her appearance. To make amends with his patroness, Taleju proceeded to search for a young girl in whom Taleju's spirit resided.

There are several Kumari goddesses in Nepal, the most famous of which is the Royal Kumari, who is chosen from among the Shakaya caste of the Newari community after a rigorous selection process. You can read all about the life of the *Royal Kumari* here.

Here is a documentary done by BBC on the living goddess.