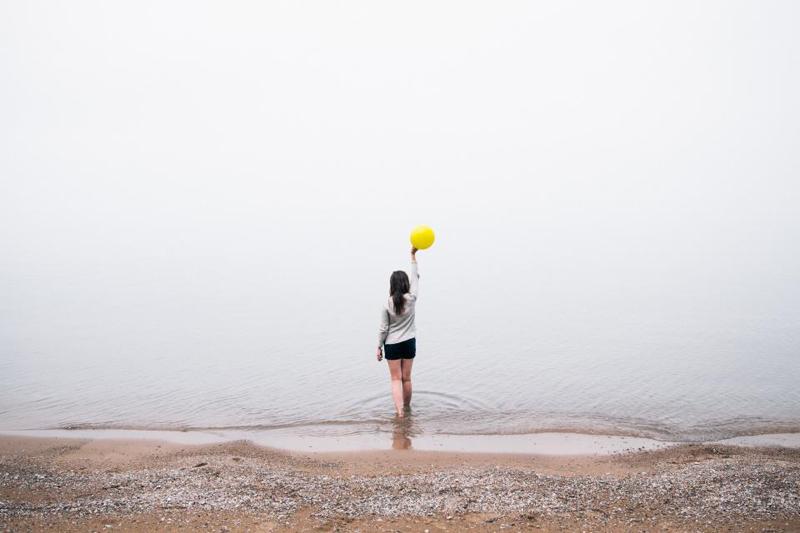 Anu was agitated. She had barely slept last night. Not even the sound of the waves soothed her today. Did she have her contacts on backwards? It certainly felt like it. No agitated was a mild word. What she felt was furious. What a sham her 18th birthday had been. Her parents had offered her a glass of champagne and welcomed her in to adulthood. What did that mean to them?

The more she thought about it the faster the rage built up inside her. Every little thing that had ever bothered her about her parents bubbled up to add fuel to her anger. Flecks of bitter angry tears blurred her vision. But she continued to run. At dawn the beach was almost empty.

Anu was so lost in her thoughts, she did not hear someone approach from behind. Suddenly she felt a hand on her shoulder and froze. Who could it be? She turned and heaved a sigh of relief. It was just Aunty. Anu saw this wrinkled grey haired old woman almost every morning running on the beach at the crack of dawn for an hour in her purple track suit and sneakers .

Anu admired Aunty's physical strength, determination and discipline. Aunty put most people, a third of her age, to shame. Only once before, about 6 months ago, had she talked to Aunty. Overwhelmed by curiosity Anu had asked Aunty her age. Aunty had frowned sternly. “Don't you know that it is rude to ask a woman her age?”

Anu had looked flustered, but then Aunty laughed. “I am kidding beta. I am going to be 75 in a few months.”

“Aunty, you are so cool!” Anu blushed wondering if she had said something stupid. But Aunty just winked and continued on her run. Ever since Anu and Aunty smiled at each other and waved when their paths crossed during their morning run.

Aunty's touch was comforting. “Beta is everything okay?” Aunty asked.

Anu brushed away her tears. She wanted to say everything was fine. But one look at Aunty's kind, concerned eyes, and she broke down crying like a baby. Aunty made herself comfortable on the sand and urged Anu to sit. “Why don't you tell me what is upsetting you so much? Talking helps to put things in perspective. You don't want those bitter thoughts to fester and grow until your pretty little head explodes, do you?”

In spite of everything Anu wanted to smile. She had been working herself in to a frenzy and now this 75 year old lady thought that she could snap her fingers and shrink her mountains back in to mole hills. If only it was so simple. “Aunty, its just teen stuff.” She shrugged looking around helplessly.

“You think I am too old to understand your problems.” Aunty observed.

“Aunty I did not say that. You are the coolest old person I know. But this stuff...” Anu blushed.

“So it is about a boy, isn't it? What's the worst that will happen? You'll speak your problems out loud. May be I won't understand. But it may help you clear your head and I promise not to be judgemental.” Aunty looked at Anu, and resting her chin on her hands, she waited.

Anu stared wide eyed at Aunty for a moment. Then she sighed and began her story. “I have always been an obedient child. My friends sometimes resent me for it because their parents are always telling them to be like me. My parents and other adults have always said I was sensible and prudent.”

Anu paused to gather her thoughts and then continued. “For over a month I have been exchanging emails with a boy in my class. And with time we found ourselves attracted to each other. I was so excited about it. I never thought a boy would be attracted to me. But this one likes me. He is so easy to talk to. At some point we both knew that we wanted more than friendship. It wasn't an awkward moment. I feel comfortable with him and yet my body tingles when we get really close.” Anu had a distant gaze and a smile on her face as if she were reminiscing a blissful moment.

Then she suddenly remembered she was talking to Aunty and blushed. “This all sounds very good.” Aunty said. “So what's the problem?”

Anu frowned. “It's my parents. When I told them, I was so excited. I was sure my parents would like him. He is intelligent, well read, soft spoken and considerate. What could they object to, right?”

“So what did they object to?”

“Nothing. They said I was too young to have a boyfriend. They said I was too young to commit to marriage and Mum said a fling was unacceptable. Dad said, it did not matter how wonderful the boy was. I am 18. I can vote and drive and soon I can even fight for my country, but they won't let me have a boyfriend.” Anger and resentment seeped in to Anu's voice

“No. I, meant to. But I couldn't do it. It felt like giving up too much.” Anu noticed the beautiful colours of the sky just before sunrise. She had almost missed her favourite part of her morning run. It felt like the sky was mocking her. Her problems were so insignificant to the sky, which would always be bautiful at sunrise.

“So you confronted your parents again?”

“No. I just continued the relationship without telling them. The odd thing is, I am a terrible liar. I cannot mask the guilt I feel when I lie. But this time it was different. I felt no guilt. I was sure I had made the right choice and I had no qualms about lying to my parents. That's what made it doable.”

“Then why are you so upset?”

“I decided to tell them the truth. I thought if they saw how well the relationship has been going they may change their minds. I do want them to get to know him.”

“I see. You told them last night? Are they very angry?”

“Yes.” Anu's tears flowed thick and heavy. “My mother is particularly angry about the lying. Doesn't she see that she left me no choice? How could I explore this possibility any other way? How can I stand up for a choice without exploring it first? At the same time, why should I give up something with so much potential just because she tells me to? My parents did not even do me the courtesy of meeting him. For years I obeyed them without question and when something was so important to me, they could not even bother to hear me out. They just tried to shut me down. Why won't they give me a chance? Why won't they trust me? Haven't I earned that?” Anu punched the sand in frustration.

“It must be upsetting for you. But do you see how strange this is for them? For years you have listened to everything they have said and now suddenly, when it is such a crucial matter, you wont. They don't understand it. They don't know what's making you act this way. They are worried they are losing their sway over you. They desperately want to guide you, but the method they have always used successfully is failing and they don't know what to do.”

“So you are saying they are right?”

“No I am saying they are confused. You are changing faster than they can handle.”

“That's for you to decide. Whenever you want to grow up and take charge of your life, it is going to be a difficult battle with your parents. Humans find it very difficult to relinquish control. If you want to make this decision for yourself, own it. Being an adult is not just about making decisions, but also accepting the consequences. Growing up is exciting and scary. The question you must ask yourself is if you are ready to grow up and face every aspect of it. This is not about your parents or anyone else. This is all about you.”

“And what if things go wrong?”

“Yes. What if they do? Do you trust yourself to get past it? Are you strong enough to deal with regrets? These are the questions for you to answer.”

Suddenly, as sunlight flodded the horizon, enlightenment dawned. It was such an amazing revelation and yet so simple. Anu finally understood that this decision was only partly about how her parents felt and how trustworthy the boy would be. These were all circumstances life was placing her in.

In future there would be many more difficult circumstances and far more terrifying decisions to make. What really mattered was, if she trusted herself.

Did she trust herself, not only to make the best possible decisions she could, but also to deal with whatever consequences her decisions had? Could she rely on herself to be emotionally strong enough to deal with failure and find a way to move on and rebuild. If she could believe in herself, then she was ready to grow up.

Anu looked at Aunty and nodded. Aunty smiled and gave her a hug. Aunty had not made her decision any easier, but now at least Anu knew where to look for answers, and she knew how futile getting angry with any one else was.