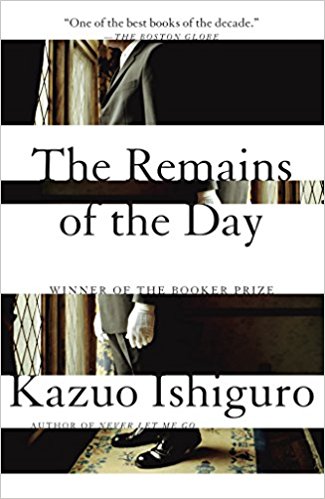 Mr. Stevens works as a butler for Mr. Farraday, an American gentleman who purchased Darlington Hall a few years ago, after the death of Lord Darlington. Mr. Farraday encourages Mr. Stevens to take a motoring trip through England in his car, whilst he is away.

During the course of the trip, Stevens reminisces his past life and relationships. He is an introspective man, dedicated to his work, and to excel at it, he searches for qualities and techniques that define the ideal butler, and then relentlessly works towards acquiring these qualities.

In spite of all this time spent in analyzing his life, Mr. Stevens indulges in a surprising degree of self deception. In fact, as the book progresses, it becomes clear, that Mr. Stevens is constantly trying to convince himself, that he has led a worthy and meaningful life, but doesn't actually believe it.

In his youth Mr. Stevens is convinced that the most crucial quality a butler must possess is dignity, which he believes is best described as not undressing in public. But it would be more accurate to say, that he means not stepping out of character in public. The mask and persona of a butler, he believes, may only be shed in complete solitude.

A part of dignity, Mr. Stevens believes, involves the ability to stay calm and unruffled, under tremendous strain and emotional stress, and still execute one's duty flawlessly. Mr. Stevens has practiced ignoring his emotions, until he finds rare moments of solitude, during his busy day.

As a result, over time, almost all of Stevens the person, is Stevens the butler. He never finds time to cultivate any personal relationships. His single minded devotion to his duty, and his deliberate insistence on suppressing his emotions, sabotages any chance of him, developing a relationship with the housekeeper, Miss Kenton, even though it is clear this is something they both want. So extreme is Mr Stevens dedication to his duty that, when his father dies, he delays going upstairs to see him, until he finishes his day's work.

He justifies neglecting his personal life, by convincing himself, that it is all for a worthy cause. He believes Lord Darlington, his employer, who he loyally serves for a few decades, to be a person of lofty morals and ethics, toiling to achieve a better future for the country. He considers it his privilege to contribute indirectly, even in a small way, to a better future for Britain. He takes great pride in serving one of the most influential people in British politics, and basks in Lord Darlington's reflected glory.

But when Lord Darlington's reputation is tarnished, because has either deliberately or inadvertently participated in dubious dealings with Nazis, Stevens desperately tries to find some meaning in his life. His first instinct is to deny the all wrong doing on the part of Lord Darlington, and then when he can't really get himself to believe that, he tries to rationalize and justify Lord Darlington's actions, and finally, when even that fails to bring him peace, he admits the truth and breaks down. He laments having given his best years, to a man who did not prove worthy.

When Stevens resolves to put the past behind him, and learn a new skill, is he really starting over, grabbing a second chance at life, or has he just found a new garb under which he will repeat his old mistakes? Read the book and see what you think.

The book takes a look at the life and mind of Stevens the butler through a series of small incidents and flashbacks, that are flawlessly intertwined. With every page you get to know Stevens a little better, and you learn to read between the lines. As he talks about various situations and people, you slowly learn to decipher his self deception, and a part of me wanted to be fooled by it too.

The way Stevens goes about self deception is so realistic. It made me think of a time I said something mean to somebody, and initially I firmly believed my behavior was exactly what the other person deserved. But as I calmed down, over time my certainty was slowly melting away. Doubts were creeping in. Eventually I realized I was the one who was wrong.

But this process takes many iterations of dwelling on the same incident. And that is what Ishiguro does with Stevens. Steven's visits the same questions over and over again, but each time he opens up a few new details that he has been hiding from and that paints an ever so slightly different picture from the earlier one.

Little by little Steven's unlocks each painful memory in a torturous process, to finally see for himself the full picture for the first time. This is so much like the process any of us go through when making a slow progression of being sure we are right, to realizing we are wrong.

Although the process is torturous for Stevens, the writing is brilliant and engaging. The book barely sees any action, but it never gets boring. In fact, I would go so far as to say, it is a fascinating and tantalizing page turner, revealing information as the layers of deception slowly peel away.

Unlike Stevens, I wasn't devastated at the end. Lord Darlington turning out to be a disappointment, did not, in my opinion, diminish the diligence and thought Stevens put in to his work, and the efficiency and near perfection, with which he executed it.

I wanted to tell Stevens that he did a good job, and the fact that he served a man he eventually lost respect for, did not take away from the quality of his work. He enjoyed his work and did it well, and that in it self should have been rewarding. I wanted to tell him, that I did not think his life was a waste, but that he was just looking at it the wrong way.

The mask became the man and then the illusions started fading.