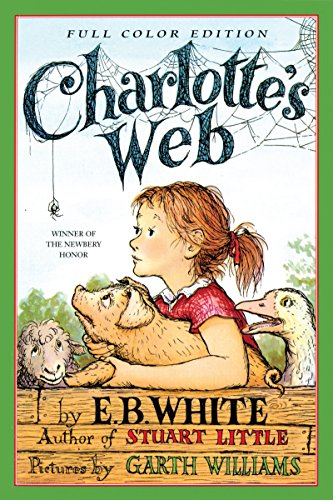 Charlotte's Web by E. B. White, is a story about the life of the animals on the farm as seen through the eyes of a pig named Wilbur.

Wilbur was born a runt and would have been put to death right away, if the kind hearted little Fern had not come to his rescue. Fern begged her father to let Wilbur live and promised to take care of him. Wilbur had many beautiful days in the sunlit woods as Fern's beloved pet, before Fern's father insisted on selling him.

Fern was very upset, but fortunately, her mother was able to suggest a compromise. Wilbur was sold to Fern's uncle Mr. Zuckerman, who was a farmer. He lived close by, and allowed her to visit Wilbur in the farm and watch him and the other animals.

Fern loved all the animals and spent hours silently watching them, enjoying the smells and activity in the barn. But poor Wilbur was upset by the sudden change in his lifestyle. Although he was thrilled to be so well fed, he missed his freedom, the outdoors, and a chance at exploring the world at large. He also felt lonely and friendless, being the solitary pig in the pen with a grouchy unfriendly rat being the only other occupant, or so he thought.

Wilbur's early upbringing with Fern resulted in him being naive of the harsh truths of farm life. So when he learned that he was being fattened to be slaughtered at Christmas time, he was frightened and shocked. But just around this time, he made an unlikely friend, someone who unknown to him, had been living right near him, all along.

Can Wilbur's resourceful new friend actually save him from the grisly fate that awaits him at Christmas? Read on to find out.