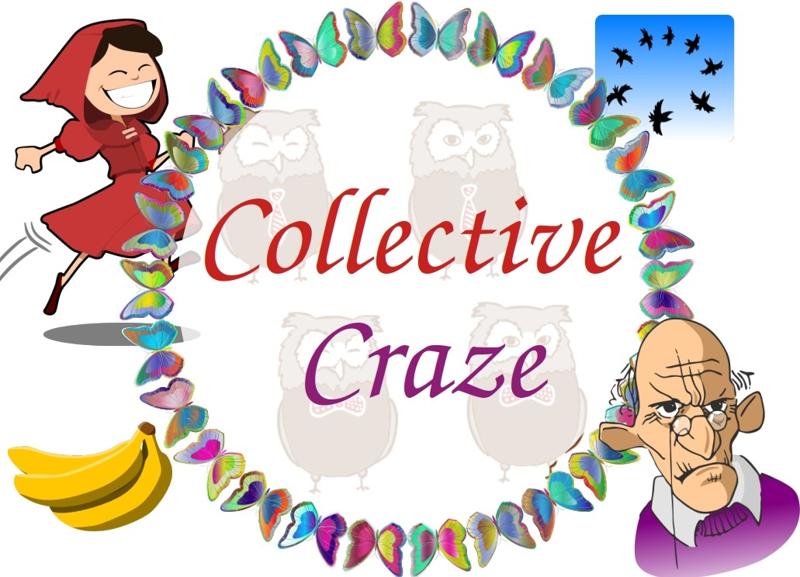 Image made using pictures from OpenClipart

Nina: Nana did you know what a group of owls is called?

Nana: Actually, I do. It’s a parliament of owls. Ha!

Nina: Correct Nana. But they can also be called a stare of owls.

Nina: Frightening, would be a murder of crows.

Nana: Is there such a thing as a snore of bores?

Nina: Funny. I don’t know about those bores Nana, but it would be a sounder of wild boars. I bet Obelix would like them.

Nana: He’d be ecstatic, like an exaltation of larks.

Nina: Good one, Nana. But I bet you don’t know what a group of bananas is called.

Nina: No at all boring, Nana. A single banana is called a finger so a grouping of attached fingers is called a hand.

Nina: And hands that grow in a cluster are called a stalk or a bunch. So a bunch of bananas contain several hands.

Nana: How handy. Now leap out of here like a leap of leapords.

Nina: But what if I crash into something like a crash or rhinos?

Nana: Then I would look upon the incident with an unkindness of ravens. Hee hee.

Nina: No, I think I’ll prance around like an ostentation of peacocks.

Nana: Hmph. Can’t you at least disappear like a flutterby of butterflies? Must you hang around me like a bad omen of vultures.

Nina: I must. I particularly like the collective nouns proposed for mathematicians with different specializations, like a distribution of probabilists. They even mentioned a knot of low-dimensional topologists. Did you know knot is also used as a collective noun for toads?

Nana: And is it a naughty of Ninas? <Hyuk>