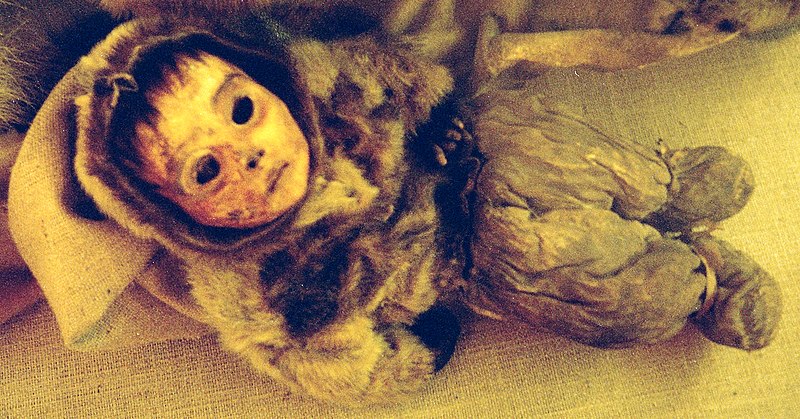 Nina: Nana I read some incredible things about Mummies.

Nana: Really, now we are going to revisit subjects al ready discussed. Especially, long dead ones. This is becoming impossible.

Nina: But Nana, you won’t believe what I just read. A 2000 year old mummy was found with blood in its veins and an intact stomach and other organs. Its skin was as soft as that of a living person with moisture and elasticity.

Nana: Creepy, but I guess those Egyptians had lots of practice and knew what they were doing.

Nina: You made me lose count. I’ll have to start over.

Nina: Fine. But Mummies are so interesting.

Nana: No they are disgusting.

Nina: Then why would they have names like The Beauty of Xiaohe?

Nana: I should hope not. How many Chinese Mummies are there?

Nina: Lots, but The Beauty of Xiaohe, over 3800 years old, may not have been ethnically Chinese. DNA tests indicate that her ancestry was a mix of Eurasian populations.

Nana: Where was her body found?

Nina: In the Taklamakan desert in China. But unlike Egyptian Mummies, she is a natural mummy preserved due to the natural aridity, salinity and freeze drying properties of the air.

Nana: Most unnatural, if you ask me. Yuck.

Nina: Not yuck Nana, divine. that’s what the catholic church considers it.

Nana: Now what gruesome fact are you going to spout, dare I ask?

Nina: The Catholic church believes that divine intervention prevents some bodies from naturally decomposing and the bodies are considered incorruptible and after several exhumations if they remain that way they are declared saints. However, in modern times some procedures are used to help saints stay incorruptible for longer, but these procedures seem deadly for the living.

Nana: There may be something to that theory. I vaguely recall reading something about a mummified Buddhist monk in the lotus position.

Nina: Wow the lotus position! That is amazing!

Nana: Well since we are talking about mummies, I have an interesting factoid for you.

Nana: The Egyptian Pharaoh Ramesses II, also known as Ramesses the Great was issued an Egyptian passport in 1976 so he could travel to France for some procedure.

Nina: I actually did know that Nana. He lived an exceptionally long life, and his body was actually better preserved than King Tut’s. In the passport, his date of birth is listed at 1303 BC and his profession: "King (deceased)".

Nana: Okay enough about this morbid subject. Really Nina, sometimes you do find the strangest and grossest things to research.

Nina and Nana got most of their information from this article about well known mummies.