We humans, often consider ourselves the only intelligent species on the planet. While our general intelligence surpasses that of other species, there are some species that are capable of demonstrating specialized intelligence and some of these are birds. So the next time you call someone a bird brain, think again, for the insult may not pack the punch you hoped it would.

According to this National Geographic article, ravens can quickly learn to use tools to solve problems, in some cases, even faster than many monkeys. The article also shows a video where crows make and improvise simple tools to extract prey from their hiding spaces in tree branches. Crows are also surprisingly good at recognizing human faces the article adds.

The article goes on to inform that among parrots, African Grey Parrots are the most accomplished at human speech and can slowly learn to even use some words in context and grasp a few simple abstract concepts. There are many such intellectual accomplishments of various birds listed in the article.

But today Nina and Nana are talking about a trait peculiar to humans and parrots: blushing. Oh yes! Speech is not the only way humans communicate. Parrots like humans have complex social interactions and facial expressions and body language are a big part of that. According to this article, besides humans, parrots are the only known species of animals that blush.

So let's see what Nina and Nana have to say about it! who do you think will win the battle of wits this time? 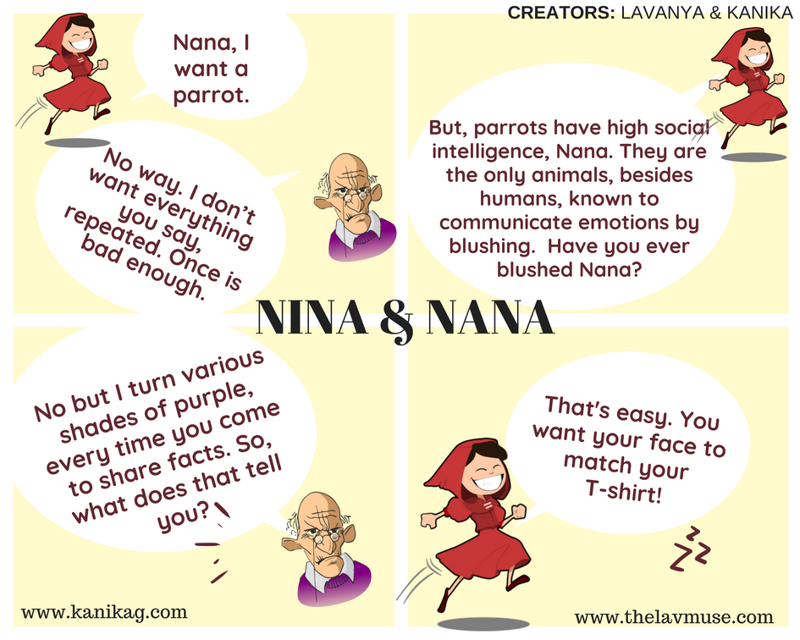