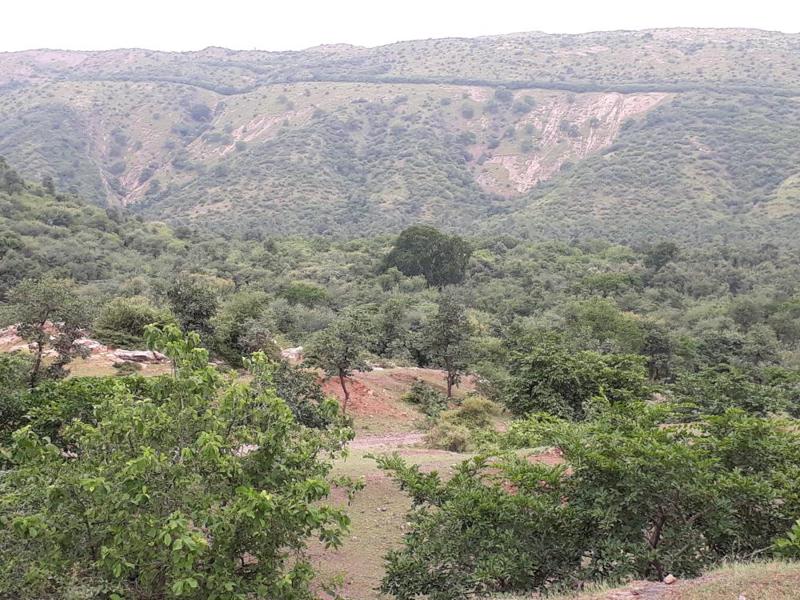 Papa and I were both jonesing for a holiday, but somehow I could not muster to enthusiasm to arrange one. I, the designated family holiday planner, felt like I had lost my mojo.

But my in-laws wanting to go for a holiday too and suggesting possible locations, provided the added motivation I needed, to get the ball rolling. After much deliberation about a destination we chose Ranthambore.

Here is how we came to the decision:

Papa and I don’t take our laptops on holidays and use social media sparingly, if at all. We also take a complete break from work, and don’t even think about it. We like to focus on outdoor activities, like walks, cycling, swimming etc or games like table tennis, frisbee, badminton, and billiards and lots of conversation with family. 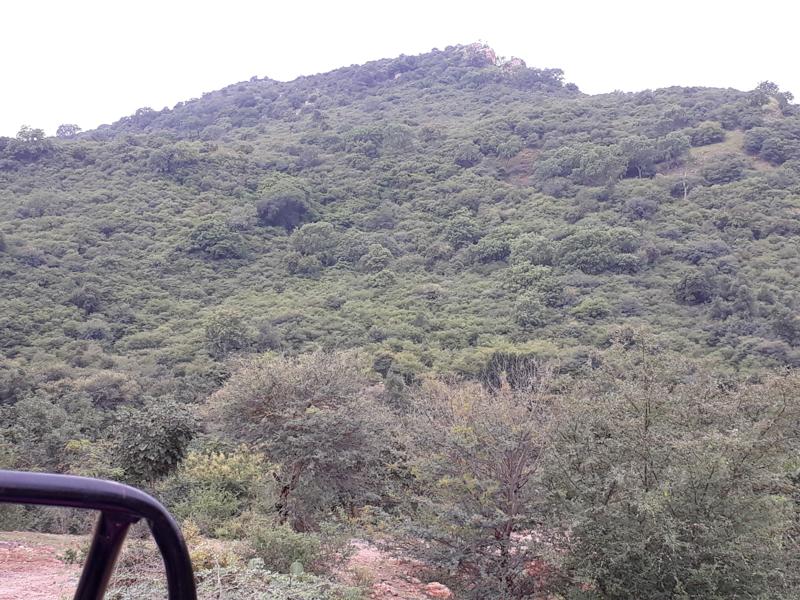 Since we went at the end of the monsoon season, the forest was lush green. We were told by the locals that in a month or so it would start turning brown and then become completely dry brush.

The thick green forest made it difficult to spot tigers, unless they came out to the watering holes or close to the jeep trails. There had been a few tiger sightings that week, but we were not so lucky. 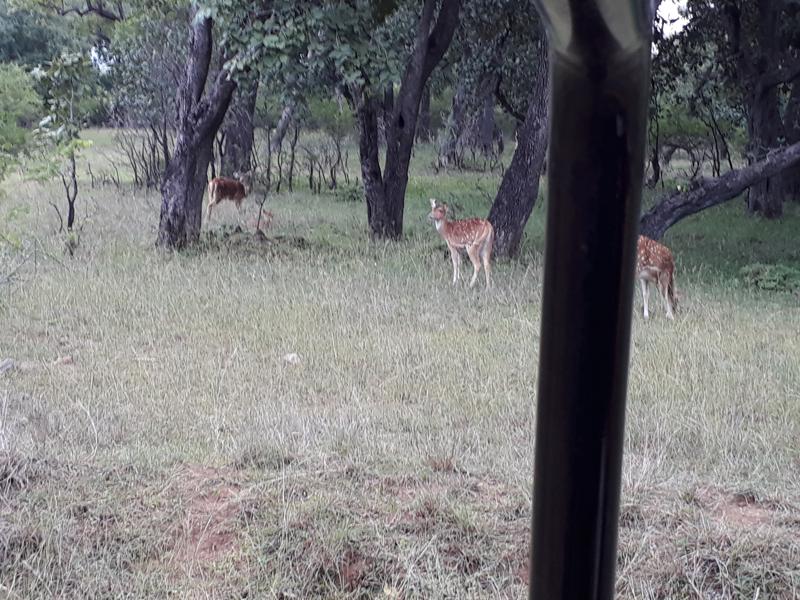 We saw the ubiquitous spotted deer, some nilgai and samba deer. We learned that the samba deer are the tiger’s favorite prey, because of their large size and weak eyesight. We also saw the Indian gazelle and a rabbit, or possibly a hare, the size of a dog. 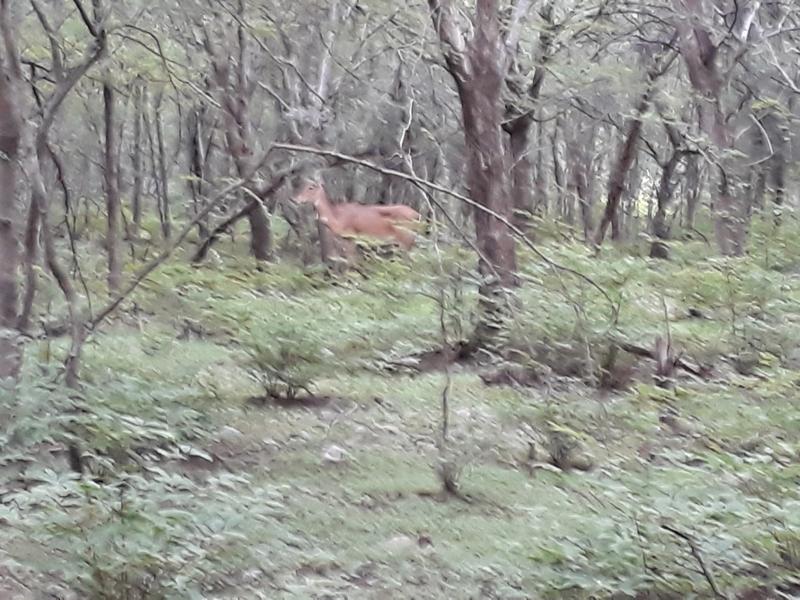 The park also has crocodiles, 25 feet long, but we did not get to see those, as they are usually in the zones that had been closed for the monsoons. The forest has 10 zones, and only zones 6 through 10 were open. We did not get to see the sloth bear that lives in the park either. This is probably, partly because the driver and guide were entirely focused on spotting the elusive tiger. So if you go, you may want to urge (may be even nag) the driver to show you the other interesting wildlife too.

The tiger is not easy to spot, because there are only 62 of them in an area of over 362 sq km. Compare this to Gir, where there are almost 500 lions over an area of 258 sq km, and even there a lion sighting is not guaranteed.

The jeep ride is very bumpy, especially if your’e on the back seat over the rear wheels, but on the bright side you are driving through interesting, untamed forest terrain. We kept the kids in the middle seat with a grown up on either side holding them to make sure they did not get bumped out.

The park has lots of peacocks, and we were lucky enough to see one do an elaborate dance with it’s gorgeous tail feathers spread out.

We saw lots of monkeys (long tailed black faced hanuman langoors) and some of them were quite comfortable with stealing biscuits from tourists. 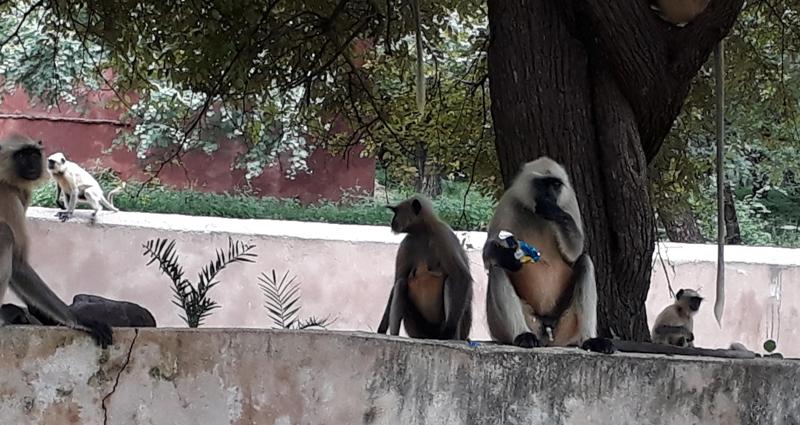 We were there on a cloudy day in the first week of September and the safari was very pleasant.

On the next day, we visited the Ranthambore fort, which provides a gorgeous view of the forest and its lakes. 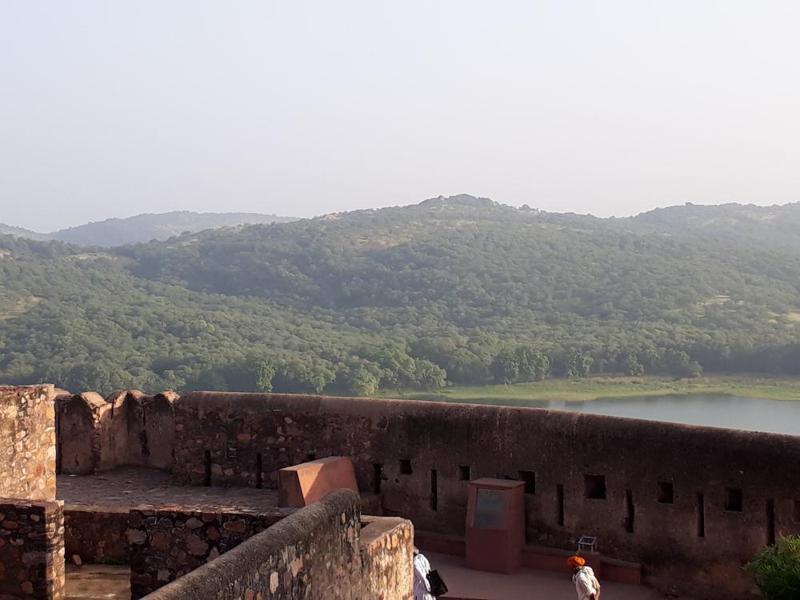 It was too crowded for our taste, probably because we went during Ganpati celebrations and the place boasts of Ganesh temples, but we did find one secluded trail past an abandoned temple, that led to a beautiful garden. 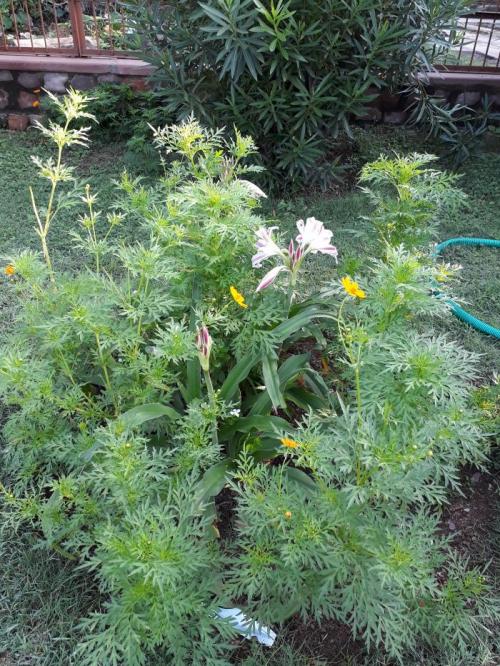 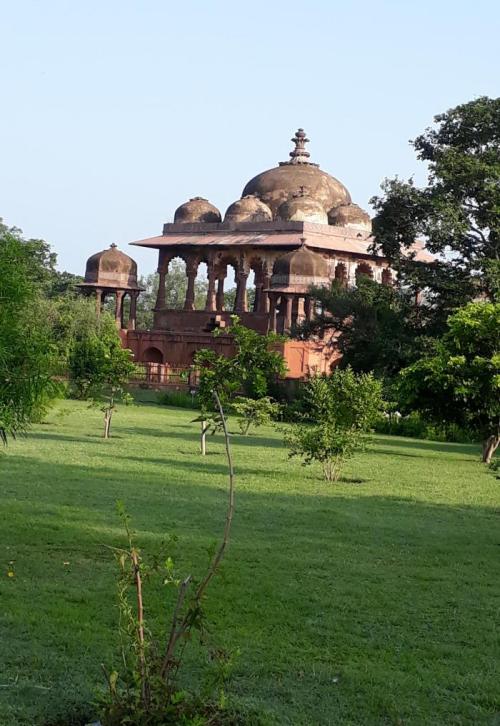 However, the day we visited the fort was not cloudy, and in the strong desert sun, we were uncomfortably hot.

While it may not have been the best time to see tigers, it seemed like the best time to be guests at the Taj Sawai Madhopur Lodge. We (Papa, me, the kids and my in laws) had opted for the monsoon package which was available till mid September. With the package we stayed for 3 nights at the price of two at a very reasonable rate that included breakfast, one meal and a discount on spa services. 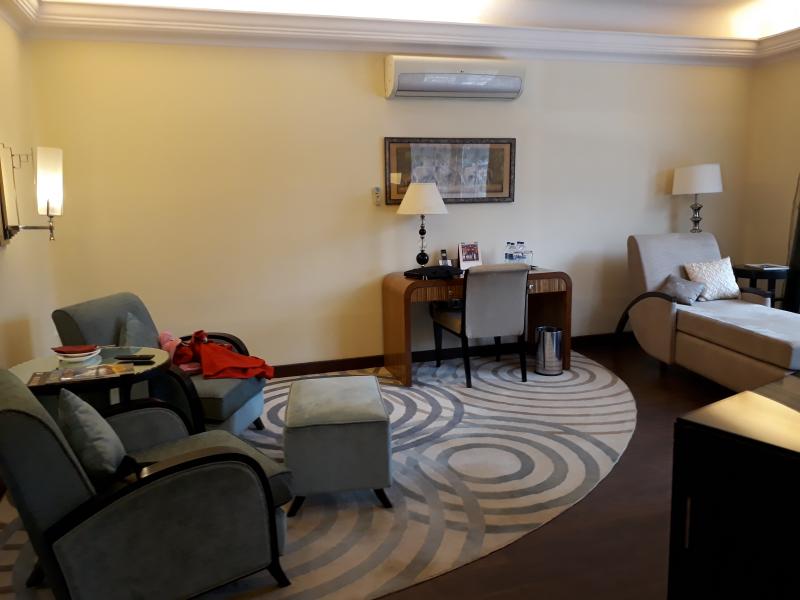 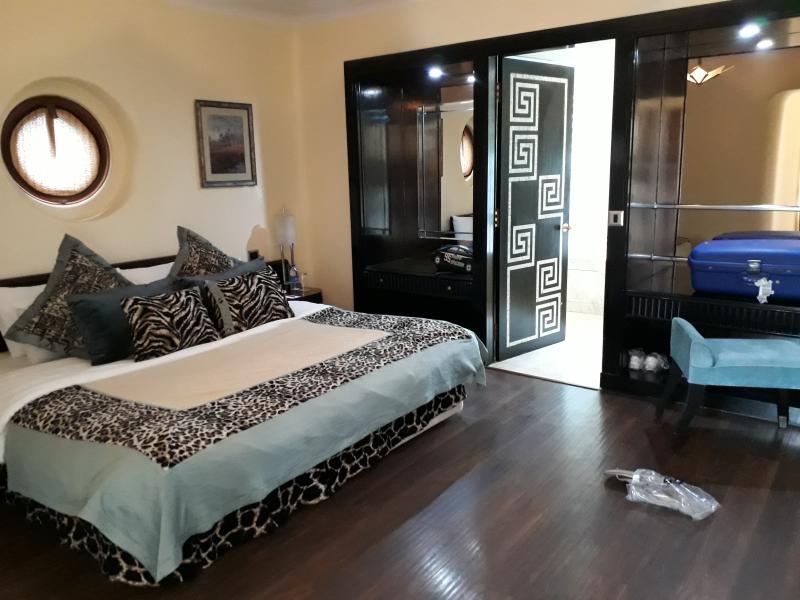 The hotel was almost empty and so at check in we were upgraded from two regular suites to two of their most luxurious suites, huge and spacious with separate bedroom, living area and a huge terrace overlooking the lawn. We arrived a little before lunch so we had fun cycling around the sprawling premises, where there were brown rabbits running around and flocks of parrots on the trees. They have cycles of various sizes for guests of all ages. 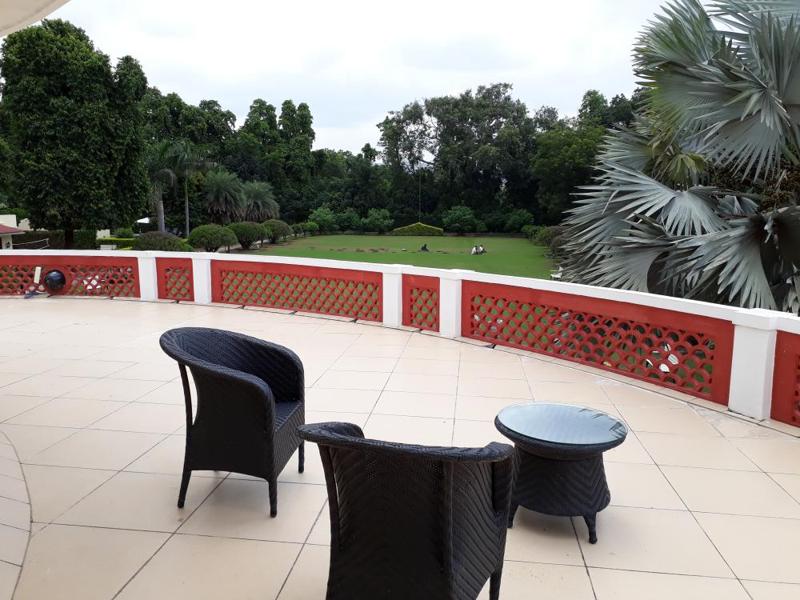 On the first day, we had a buffet lunch with a small, but scrumptious spread. The chef does magic with the food. It is light and has a home cooked feel to it, and yet the flavors are delightful.

On the 3rd day of our stay we were the only people in the hotel so the kitchen staff let us choose what we wanted for lunch and dinner. The hotel does not have room service and all meals are to be consumed at the dining room. But they were nice enough to make an exception for things the kids wanted to eat in the room like milk and sandwiches.

Every afternoon around four, we went to the pool which was really clean and we had it all to ourselves. Papa enjoyed getting a massage at the spa after a swim everyday. The girls and I did some cycling whilst waiting for Papa to finish his massage.

The hotel brought in a naturalist, to explain what we could expect on the safari, and arranged it for us. The jeep picked us up from the hotel with is about 15 Km from the entrance to the sanctuary and dropped us back.

We watched a few interesting tiger movies, the hotel has on DVD. The hotel also has a bar, a table tennis table, a children’s play area with pet white rabbits, a billiards table and some other games like carom on demand.

The stay was relaxing. The staff was friendly and accommodating, but not intrusive and we had a wonderful time.

All in all it, was a great family holiday.