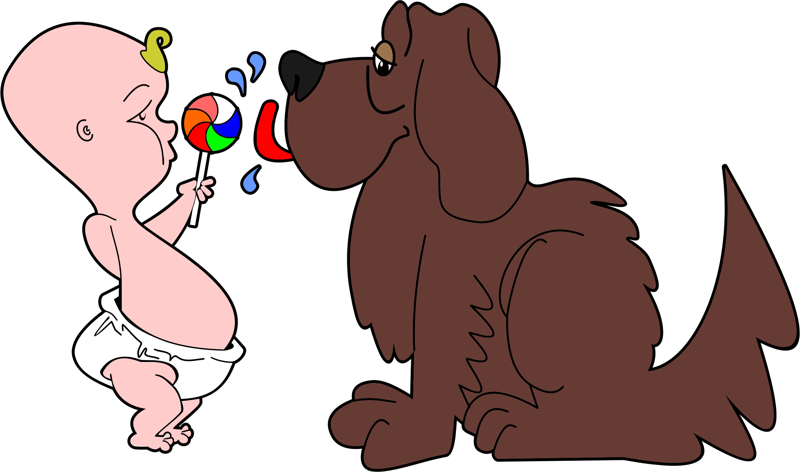 My younger daughter is approaching her terrible twos. It is a crazy time. She has always had quite a temper.

When she was a week old and I gave her calcium as prescribed by the doctors, she hated the taste, her leg trembled and face turned purple in anger. Later she would get terribly angry on being denied anything and jump up and down in rage like Yosemite Sam.

But now the tantrums are getting more frequent and less amusing and there is a lot of whining that drives me up the wall. Add to that, the older one who recently got over this phase, has decided that she needs to whine too, and louder than the younger one, to be heard over the din. There are moments when I just want to find a nice quiet place to hide for about 5 years or so.

In those moments parenting seems like a total nightmare and I am left to wonder why I enthusiastically inflicted this torture upon myself. So I decided to make a note of the moments when, even during their terrible two's, babies can be terribly cute, bowling you over.

Babies learning to talk sound utterly adorable. Papa keeps saying that this was the cutest phase of the older one's life so far and we should really cherish it in the younger one, while it lasts. “I am going to be so sad when she learns to talk properly” he says sometimes, and I know exactly what he means. I am going to miss this phase later even though it is the terrible twos.

The younger one has a new pair of yellow shoes she is very fond of. The other day when the driver came to get the car keys, she said “YEH-LOH SHOES” pointing at her shoes with great enthusiasm. So the driver says “Nahi, nahi. Tum rakh lo.” I burst out laughing. The driver looked puzzled and I had to explain. The driver assumed yeh loh meant the hindi phrase for take. The way she pronounced it, it sounded a lot like that, although she was just telling him that her shoes were yellow :D

The younger one gets so confused with the words for grandparents. She cant really distinguish between dadi and dadaji. that is what the older one calls my in-laws. So she calls them both dadi. In an attempt to help her out I first pointed to my father in law and asked “Who is that?”

“Dadi” said the younger one promptly.

Then I pointed to my mother in law and asked “Okay, then who is that?”

She saw the problem and hesitated, but not for long. “That's pumkin pie!” She exclaimed, and we all burst out laughing. No idea where she got that. I did read a book about a Halloween party to her recently. May be the words stuck, but I have no idea why Dadi became pumpkin pie. Even Dadi couldn't stop laughing.

One day the older one was at my parents place and I was using her pencil to write a list. Suddenly my younger one, who was home with me, walked up to me frowning, and most authoritatively said “Don't touch Didi's pencil”. Guilty as charged, I sheepishly put it away. But then, she came up to me with one of her pencils and said in a softer tone. “You need pencil, Mama?” She gave me her pencil and said “Take this pencil.”

One day I found her sharing her milk with the cat. I told her not to do it, as our cat is lactose intolerant and would get sick. But our cat loves milk. The next day I saw her, happily, sharing her milk with the cat again. But as soon as she saw me, she made a stern face at the cat and said "Meoow. No milk. You no take milk." Then she comes to me all wide eyed and complains "Mama, meow dinking milk." Whatever should I do with her?

The other day we had some problems with a lock and the carpenter had to come and bang at it with a hammer to break and replace it. Unfortunately the younger one was sleeping. She woke up frightened because of the loud banging and it took some time to calm her down. She kept saying “Lockk scaared.” I would cuddle her, to comfort her. Later in the evening she came saying “Lockk scaared. Carry carry.”. So I picked her up and carried her around for a while. I guess she decided to test how far she could push it. A little while later she says “Lockk scaared. Gimme chocos.” Well of course I laughed and told her chocos wouldn't help. She then threw a tantrum, but I was too amused with her ingenuity to be angry.