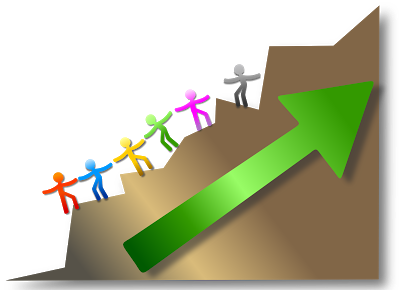 My daughter has many super powers including an awesome vocabulary and the ability to make smoke come out of my ears. But physical activity is not one of them. She does not enjoy it and she is not very good at it. By that I mean her performance would probably be below average for kids her age.

My husband and I were talking about how to encourage her to get better at it and he said that being competitive helped him. He strove to be the best and that helped him get better at various sports. I asked, “But what if, after all that effort, you were not the best?” and he said “I worked harder because I always knew I could be if I tried hard enough.”

It is great to have that kind of self image for positive reinforcement. But what if you try real hard and still don't do better than your friends?

While competition is a healthy motivator, it can be depressing to get all competitive and then repeatedly fail to be the best or the best three. I know because that was how I felt as a kid. Eventually I developed the 'grapes are sour' attitude as a defence mechanism. I developed a strong dislike for sports and video games since I was bad at them. Since I was academically successful, I just looked down on these activities and avoided them like the plague.

And today I know it was my loss. But better late than never, right?

Thanks to a wonderful friend I was able to correct my opinion of sports and video games. It all started at a party where a bunch of people were playing a video game that looked really interesting. I was tempted to try but since I was never very good at video games and my instinct was to stay away. This friend saw my interest in the game and asked me to join.

I was surprised. I added defensively, “I won’t be good at it.”

“Who cares? Did she say who cares?”, I could not believe what I was hearing.

Reluctantly, to be polite, I gave it a try. And predictably I was pretty bad.

“Hey that’s not bad for a first attempt.”

“Yeah I was much worse when I started.”

“Yeah you should try a few more times. You’ll get good at it. ” (She is trying to help me instead of putting me down.)

This interaction was a huge eye-opener for me. I realized I had been missing out on a lot of fun in fear of humiliation. Games and sports did not have to be about competition or doing better than someone else or heckling. They could just be about having fun. In this non threatening and encouraging environment with supportive friends I got pretty good at the game.

I learned to laugh at myself and be appreciative of others too. Both these things really took away the pressure to succeed and allowed me to enjoy the game.

Eventually I joined a softball team too on being encouraged by the same friend. That was a huge step for me. Predictably, I was not very good but I had so much fun playing. I would have missed out on all that fun if I had not found the courage to shed my inhibitions. And since we were just enjoying ourselves, no one seemed to mind that I was bad. In fact they tried to help me out without making me self conscious or defensive.

So now I know how to help my daughter learn to like sports. Encouragement and making it about fun, rather than competition will help her catch up with other people. I intend to try to invent some games which are fun without score keeping. For instance my daughter is not very good at running fast. So she hates races and prefers not to participate in them. But she loves playing with water. So in a game where the kids are chasing each other trying to shoot each other with water pistols would, get her to run around, improve her aim and have fun. Everyone enjoys this game weather or not you keep score. This is something I plan to try out in summer. I already get her to chase soap bubbles and burst them and she hardly notices that she is running.

Tangible progress is also important to keep kids interested in some activities. But in competing with others , if they start off far behind, progress will not be noticeable. So it is important to keep records of their performances and encourage them to do just a little better each time. Watching yourself grow is a great motivator with tangible results.

Hopefully these techniques will improve her abilities and give her confidence a boost. Once she is caught up and overcome any fear of failure, she can always participate in competition with confidence and enjoy it rather than fear and despise it.