In my physicist days, quantum theory was my favorite subject. The idea, that a photon is simultaneously a wave and a particle, known as wave particle duality, fascinated me. Louis de Broglie's thesis linked the wave and particle properties of photons, through a simple elegant equation, that made me fall in love with quantum mechanics.

Another mind blowing idea in quantum mechanics is, that quantum particles are in a superposition of states, until they are measured. So an electron is in a superposition of spin up and spin down states, until it is measured, but when it is measured, it will be found either in the spin up state, or in the spin down state. This all seems esoteric and acceptable, but to demonstrate how bizarre the ideas really are, Schrödinger designed a thought experiment, in which the state of a quantum particle would mean life or death for a cat.

You can read about the experiment in detail here, but the idea is that whether a cat in an isolated chamber, is alive or dead is directly related to the quantum state of a particle in the chamber, and as long as no measurement is made, meaning no one looks in to the closed chamber to check, the cat, like the particle, must be in a superposition of states. But in case of the cat, the bizarre thing is, that it must be in a superposition of dead and alive states!

I wrote this short story, comparing quantum superpositions to human decision making some time ago. Hope you enjoy it.

And here is what you have been waiting for, Nina and Nana's take on the subject: 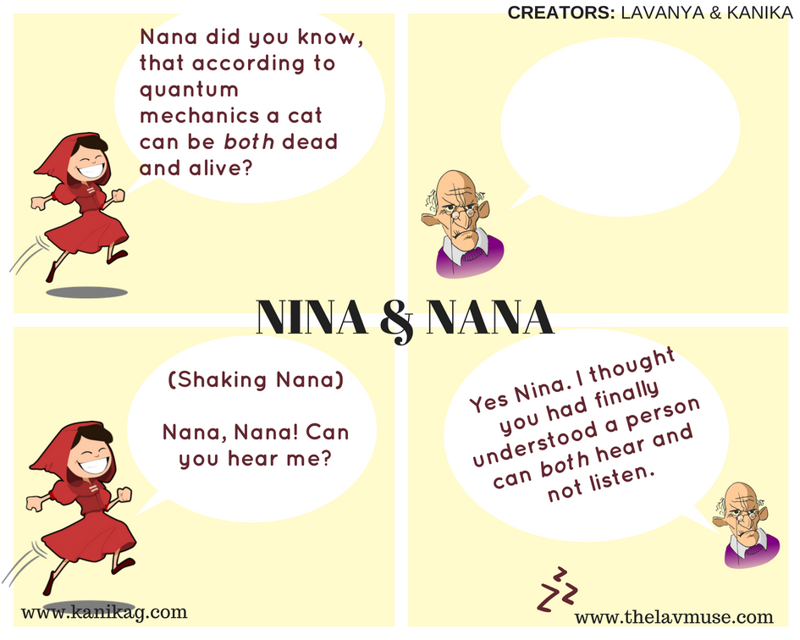