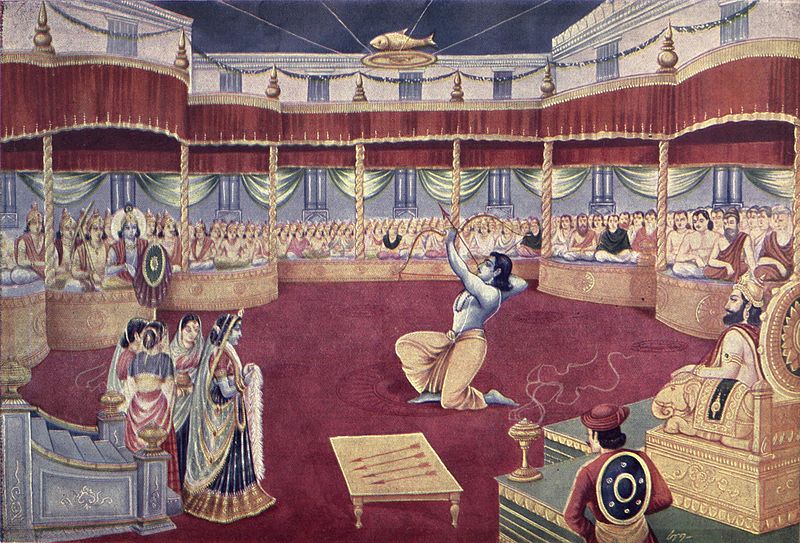 So many patriarchal cultures have historically openly practiced polygamy. Even where polygamy wasn’t common there have always been double standards for extra marital affairs. Society has usually looked the other way when men were involved in extramarital affairs, while women have usually been severely punished for it either legally or through social ostracism.

So as a kid the story of Draupadi fascinated me. Here was a shinning example of progressiveness in Hindu mythology. Draupadi, a rare example of polyandry, and yet a celebrated woman. Draupadi is also depicted as strong and willful. But is it merely a thin gold plating of feminism over the iron handcuffs of patriarchy?

Draupadi had 5 husbands is true. But was this her choice? Absolutely not. At her swayamwara, she chose Arjun and only Arjun to marry. Yet 5 husbands were thrust upon her against her wishes. Her mother-in-law Kunti, who is much revered, treated her like her commodity and distributed her between her sons.

I don’t care how awesome a mother-in-law she was henceforth. She made it quite clear right at the beginning she had power over Draupadi, and it was her word her sons would always hold sacred, and that she thought little of the human being that was Draupadi.

That was the first time the Pandavas failed to stand up for Draupadi, so why would anyone ever expect them to succeed in future? Is it then really a surprise that they were mute during the vastraharan?

Further, Daupadi’s marriage must have been one of extreme emotional torture. She had to have a monogamous relationship with each brother in turn for the period of a year, and then move over to the next one. Annually, she had to regain her virginity. Men never went through any such ritual with their multiple wives. What kind of disgusting slavery was this?

This was no polyandrous harem where Draupadi could pick and choose which husband to have sex with on a whim. On the contrary she was tormented year after year, forced to switch the men that she had to pledge monogamy and loyalty to, like some automaton whose feelings were not of any importance at all. She was expected to perform her duties with machine like precision. The period of one year was chosen, so she could bear each husband a son and there would be no doubt about paternity. She was their baby making machine, and how she felt about it all was irrelevant.

Draupadi efficiently and diligently looked after the household and finances of the five men she was married to. In her work she took pride and pleasure and found a way to express her dignity and take initiative. She had to be very careful in her marital relations, for in spite of all the complications, no compassion was shown for extenuating circumstances, and the punishments were severe, like when Arjun had to make an impossible choice and was exiled for 12 years. Draupadi had to work hard to keep peace among the five brothers who were probably jealous of each other.

Finally after enduring all the suffering involved in having forced annual monogamous relationships with 4 out of 5 men who were forced upon her, and all of whom were polygamists who did as they pleased with their other wives, Draupadi had to do her time in hell for loving the man she specifically chose to marry, more than the ones that were forced upon her.

One may admire Draupadi for her strength, resourcefulness and endurance, but her marriage certainly did not defy patriarchy and she struggled with it every step of the way even after her death.