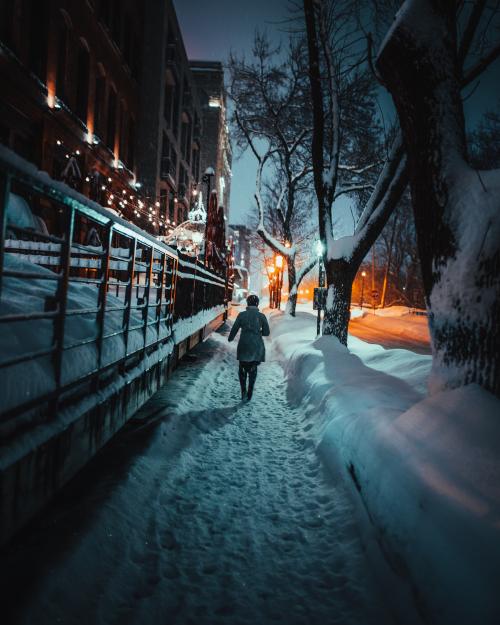 The above photo by Josh Hild on Unsplash was used as a prompt for this story.

“Aargh! How incredibly annoying.” Dan blurted out as he felt his pockets for his cell phone. Had he actually left it behind? He was almost half way home for crying out loud. And his nose was freezing in the wintry wind.

He kicked the stone parapet lining the road in frustration. “Ouch!” he shouted as his frozen toes crashed in to the hard stone surface. He felt around his coat and jeans pockets once more for his cell phone. “Fine. I guess I just have to go back. ” He mumbled annoyed and retraced his steps to Natasha’s apartment.

And she is going to be so mad at me, Dan fretted. She has that important meeting in Ohio tomorrow, and in 5 hours she has to leave for the airport. But at least the phone is on silent, so it won’t bother her.

She had said she wanted to be well rested, for the outcome of the meeting would determine weather or not she would get a promotion at work.

Dan had wanted to stay the night. The evening going so well. It had been their third date and traditionally the one in which to initiate coitus. Dan had hoped for it. He had arrived armed with the appropriate protection. But then Natasha was adamant. “The meeting tomorrow can make or break my career, Dan. I must stay focused.” She had insisted.

Never mind, thought Dan. There will be a fourth date and then another. He was sure of it. Natasha had shown so much interest in his hobbies, his work and his family. Clearly she was in this for the long haul.

As he approached Natasha’s apartment, he was surprised to notice the dim glow of a night light in her bedroom. Perhaps she was afraid of sleeping in the dark, he mused, and it made her ever so much more endearing. He hoped she wouldn’t be too mad at him, but what else could he do? As a sales guy, his cell phone was his life line, and she was supposed to be in Ohio for the next couple of days.

Dan was about to press her doorbell, but he hesitated. Natasha often left the door unlocked, he knew because she had mentioned it just a few hours ago. Perhaps he could slip in and pick up his phone without disturbing her. Slowly he pushed the handle and noiselessly opened the door. Perfect, he thought, as he saw the phone lying under the coffee table reflecting the dim light oozing out of a narrow gap under the bedroom door. But just as he was about to reach for the phone, he heard voices.

Baffled and panicking, he ducked behind the couch, just in time as the bedroom door opened. A strange woman stepped out and walked towards the kitchen. Dan could no longer see her, but he heard her put something in to the microwave. A few seconds later Natasha stepped out and followed the woman in to the the kitchen.

The two women seemed to be having a very strange conversation. It took Dan a couple of minutes to follow the thread of the conversation he had stumbled in to the middle of. His heart skipped a beat when he figured out that Natasha and the unknown woman were planning a murder that they would execute that very night. He stifled a gasp just in time, when he realized that the person they were planning to murder was his upstairs neighbor. He had complained to the super about his neighbor several times for bouncing a ball or tap dancing at the oddest hours of the night. But for all his idiosyncrasies Mr. Bradshaw did not deserve to be murdered, Dan thought.

Distracted by his thoughts about Mr. Bradshaw, Dan almost missed out the most important part of the conversation he was eavesdropping on. He almost fainted when he learned that Natasha and her accomplice were planning to frame him, Dan, for the murder. Natasha had shared with the other woman all the personal information she had fished out of him on their date today, and they were discussing which bits they could effectively use to make the frame up convincing.

Dan struggled to keep calm and silent so he could hear all their plans. He waited till they returned to the bedroom and then quietly grabbed his phone and slipped out of the apartment. His mind was in a whirl. What should he do? Should he warn Mr. Bradshaw? But Mr. Bradshaw may not believe him. Besides, from what he could make of their conversation, Mr. Bradshaw was probably a Russian spy. That explained all the strange noises at odd hours.

Who were these girls? The whole thing was so surreal. However did he get tangled up with them? He remembered Natasha saying that she had sought him out because he lived in the Apartment below Mr. Bradshaw. Yes, of course, she had bumped in to him at the supermarket carrying an armful of toilet paper. It had seemed so cute to him them. To think it was all a charade on her part. A new alarming thought occurred to him. Were the girls working with the CIA? Hadn't that other woman mentioned something about the agency. In that case, going to the police may be a very bad idea. Whatever could he do? He was too frightened to return to his apartment, and it was just so cold outside.

Then he had an idea. The important thing for him was to find a reliable alibi. That way he could not be framed. Then it came to him. The drive-through ATM had a security camera that recorded its surroundings at all times. The arches around the ATM shielded him from the wind. So he leaned against the wall in front of the ATM and snuggled up feeling safe. The security tapes would show him lying there all night with the appropriate time stamps.

But what next, he wondered, sleepily. Tomorrow, well he would cross that bridge when he got to it, he decided and dozed off.

Far away from the ATM, in a dimly lit bedroom Natasha and her friend were incapacitated by a fit of giggles. Finally, after almost a quarter of an hour, Sally calmed down enough to say, “Really Natasha. You’re a riot. How could you do that to him? I wonder what he is up to now.”

“No need to wonder.” Natasha replied recovering a few seconds later. “I bugged his phone. And as for how I could do it, whatever do you mean? You were the one who dared me to! You dared me to convince my new boyfriend that I was plotting to frame him for murder.”

“Tasha you idiot. I was drunk at that party last night!”

“Yeah, but a dare is a dare and I always meet the challenge.”

“By the way what do you mean you bugged his phone?”

“I mean, I programmed it to send me its GPS co-ordinates every few minutes. See he is at the drive through ATM. He has been there for a while. Smart guy. The security cameras there provide an iron clad alibi of his whereabouts.”

“Wow you are tech savvy! Amazing, how you used that concealed webcam to spy on the door, so you would know when he entered. He was as quiet as a mouse. We would never have known without it. But how did you know he wouldn’t ring the bell? What would you do if he did?”

“I didn’t know he wouldn’t. I had turned off the buzzer in case he did, and hoped he would just try the door. I made sure he knew I usually keep it unlocked. I slipped it in to some anecdote I told him today. After all, I had taken his phone, and I knew how important it was to him. I also made it very clear that I would be very upset to be woken up. If he had knocked I would have not answered, and he would have probably tried the door anyway. I must admit it was the weakest part of my plan though.”

“So you think he will ever forgive you for this prank?” Sally asked.