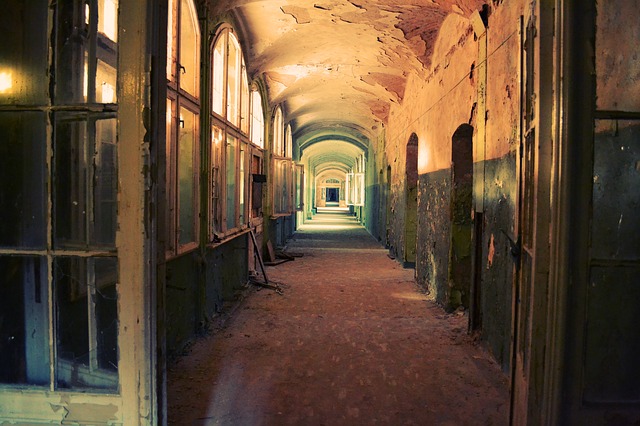 Photo is originally from pixabay and I found it here. The story was motivated by this picture in addition to the following sentence prompt.

In the hallway, they saw a corridor with several doors leading off it. Everything in the hall was covered in dust, as though no one had touched it for a hundred years. Myra gasped as she opened her eyes and pushed Rajat away.

A moment ago, they were sharing their first kiss in the corridor outside the physics department. College was practically deserted in summer, so they hoped no one would pop out of one of those doors. 200 year old gothic architecture added to the magic of the moment. How many students before us have done exactly this, she wondered as they kissed, and how many more will do the same in the next 200 years.

Now, everything was familiar and yet so alien. They were in the same corridoor, but it was a decripit old relic. What had happened to the place in a fraction of a second?

They ran in and out of the many doors desperately searching for answers. Finally, just outside the main entrance, was a plaque, or was it a toumbstone?

Year 2118 AD: The sea level near Mumbai rose suddenly due to global warming and washed out large parts of the city. This college was flooded for months and people finally abandoned the city that never slept.

Over a 100 years in the future. That’s where they had somehow landed. And it was nothing like they had imagined with youthful optimism.

#TellTaleThursday with Anshu & Priya done using the sentence prompt they posted. Thanks Anshu and Priya for hosting this.